At first sight the work of a VJ looks very much like video art. It uses almost the same equipment and therefore has a similar aesthetic. On the other side, it has also taken over a lot from performance – particularly the live creation of an experience in which various senses are stimulated simultaneously. Many VJ’s themselves seem to compare their work particularly with the latter, and at the same time see a direct connection with the rise of techno music and the video clip in the 1980s.

Nam June Paik
Information from all over the world is thrust upon us by the media every day, information that we find valuable, or that we would really rather not hear, information that we don’t understand and information that is of absolutely no interest to us. The choice of what we will hear and know is no longer up to us, because the media is everywhere, and we can’t escape it. Nam June Paik produced a radical manifesto regarding this media overload in the world. With surrealist humor, cynicism and passion, he undermines the traditional language of television. His collage is designed as a stream of consciousness; he takes you with him on a journey through his own controlled chaos. Paik produced a pastiche of icons from the art world and pop culture, elements from the multicultural society, trying in this way to influence the world of television, video and contemporary art. The postmodern content of his work in turn gives viewers a chance to think about things for themselves, take up the story and give it their own interpretation.

Vasulkas
Together with his wife Steina, Woody Vasulka can be counted as one of the first pioneers of video art. Woody worked as a film maker and Steina as a free-lance musician until they encountered video in 1969. From that moment on their lives were dominated by this new technology. Particularly for Steina this meant a major career upheaval, but she never had second thoughts. ‘It was as if I had fallen in love, what a wonderful feeling. From the first moment that I had a video in my hands, I never wanted to do anything else. I knew that I had found my medium.’ Inspired by the new technology, Woody and Steina investigated all the possibilities that electronics gave them. They experimented with sound and image and made documentaries about theatre, dance and music, with special attention for the New York underground scene. Later the stopped using the camera in a traditional manner, covering the lens and using pixels to make images within the camera. The Vasulkas created abstract television, television literally made in the camera, not through the camera’s eye. The traditional form and status of the image was set aside in favor of exploration of the electronic signal and the moving image. Their works are rightly called technical tours de force, but also offer new perspectives for how images function.

Livinius & Jeep van de Bundt
The work of Livinius van de Bundt is deliberately neither narrative nor figurative. That is the language that television has appropriated for itself, and what Livinius has to day cannot be communicated with it. According to him, the viewer must realize that it is the expressive properties of video that make a film. The frame of reference which television creates assures that the viewer will expect certain things of a film – namely that it will tell a story and show recognizable images. According the Livinius, a film does not have to have these qualities, because it is light, color, movement and sound that create the film, not the story it tells or what it depicts. Livinius makes abstract, rhythmic video paintings for the electronic music of his son Jeep. The image changes in time with the music, and the video painting thus has no definitive form or color. What you see and hear is all that there is.

Marc Burkett
Marc Burkett uses the computer and other electronic technology to make video paintings. For years he has been occupied with the various possibilities this equipment offers him. By now he has acquired great control over video techniques. By manipulating existing images and separating them from each other, he gives himself the potential to assemble his own compositions. When various scenes overlap one another the video becomes harmonic, but at the same time also intense and compelling. He creates images in which colors melt together and move rhythmically across the screen, or create kaleidoscopic patterns. With the combination of existing images and synthetic images created by Burkett, the videos take you by the hand, but lead you through unknown territory.

Paul Dougherty
Paul Dougherty was the first to introduce many techniques which are still used in making music videos today. His early works are driven by the music and are often regarded as early video clips. One of these works is Frankie Teardrop, a video clip based on a piece by the band Suicide. The video is assembled from film fragments that Dougherty collected over a period of two years. The clip shows how a young man breaks under the pressure of the hard urban life of London in the 1980s. Driven to despair, he shoots his wife and child dead. The visual effects and the mix of different film fragments make Dougherty’s video at least as horrifying as Suicide’s story. Still, the images of children’s clothing, cemeteries, pecking birds and sunsets never lose their poetic power.

Dove Eylath
Eylath’s work generally has an improvised, intuitive, live character. During his performances he uses live camera work and mixes it on the spot. Sometimes the situation demands cooperation from the audience, and other times he adapts his work to the material that is available. In his work Auto Crash Victims he plays with images of an automobile accident by laying paper and little figures on the television screen, and mixes the factual data with remarks about sexual intercourse.

The best of VJ Culture 2003/04
To celebrate its second anniversary, VJ Culture is showing a special 60 minute selection of videos, highlighting ‘the best’ VJ mixes from its previous screenings. On top of previously screened videos, Coldcut will be showing his latest mix from RevUSA produced in collaboration with TV Sheriff, ‘World Of Evil’ this is arguably the definitive scratch AV political manifesto, sampling more than four decades of presidential speeches with a good serving from the Bush / Kerry electoral campaign of 2004. Compilation by VJ Anyone for ICA London 2003/04.

microscope session, 2005
The Trans-Media-Akademie Hellerau is the organiser of the series of events entitled “microscope session“. With the Festspielhaus Hellerau as its venue the “microscope session” event experiments with forms of synaesthetic perception. It serves the contemporary desire for synaesthetic perception. The result of four years work is now compiled in the storage device of a DVD. It is a dream dreamt for a long time not only by artists to be able to see sounds as images and hear images as sounds. What was intended by the Russian composer Alexander Skrjabin already in the late 19th century in his “colour-symphonies”, very likely falls back onto the original human ways of perception. The syncretistic awareness of the original peoples, which did not yet know about the separation of object and subject, exterior and interior, real and symbolic, perceives the reality synaesthetically. The “alchemists of the electronic arts” or the “modellers of the audio-visionary” are the creative and cultural forerunners who develop media in order to work with them artistically. The interfaces of club and museum, party and work of art, aesthetics and economy, science and life are the contexts in which vee-jays act. microscope session DVD – new co-operations in sound and visuals will be published in April/May 2005.

VeeJay Nights, 2001
VeeJay-Nights.com gives information on the European veejay culture, important representatives of this developing art form and many live performances of image manipulators from London to St. Petersburg on video. For the North German television station NDR the European Media Art Festival has produced six thirty-minute TV features on the veejay culture in St. Petersburg, Berlin, Amsterdam, Paris, London and Barcelona. Filmmakers from these cities have portrayed the video artists and club scenes of these European centres using their own individual style and concept. Capturing the atmosphere of the city at night and in the clubs, short interviews, sounds and visuals have been combined into a unique portrait of a young visual live culture. VJ’s in different countries have been asked to show their world. Among others: London from d-fuse (London); Barcelona from Facundo Beraudi (Barcelona); St. Petersburg from Frank Stender (Berlin); Paris from Sandra Bar (Paris); Amsterdam from Arno Coenen (Amsterdam) and Berlin from Jan Müller (Berlin).

VJ Groove, 2000
European Media Art Festival
The festival presents the innovative crossover of dance floor, design and media art projects in a series of events held from Amsterdam to Berlin. The central link between all participating DJs and VJs is the sampling and remixing of different sound and image material in a continuous crossing of boundaries. The young international VJs experiment with cool design and subversive ideological criticism with the flooding of images of our media society. It thereby tests out the effect and reception of our everyday media. They range from documentary found footage and self-made film material to digital computer animation and synthetic colour cascades. Many of the VJs focus on images and icons of the old and the new century in order to deconstruct old fashioned meanings and to create new associative meanings of reality with the DJs soundtracks. The international DJ and VJ avant-garde will be present live with DJ Spooky und Art Jones, The Herbaliser and Hexstatic, Kid Loco, Les Asteroides, DJ Koze, FM Einheit and monitor.automatique.
Chemistry – Veronica TV, 1999
Because of the success of the Chemistry Club night in Escape, Veronica-TV broadcasted a weekly Chemistry-program at the beginning of 1999 produced by a resident VJ of Chemistry. The Sounds & Visions of Chemistry is shown on television in thirteen episodes.

Visual Sensations, 2004/05
Visual Sensations is a compilation of the finalists of the VJ contest Visual Sensations, organized by ProductionHouse Paradiso-Melkweg and the Netherlands Media Arts Institute. With Visual Kitchen, Résistance Électronique. Subliminal Mess., SF&L, organisation of imagination and Drifter TV Live. The runner-up is: SXNDRX and mnk. 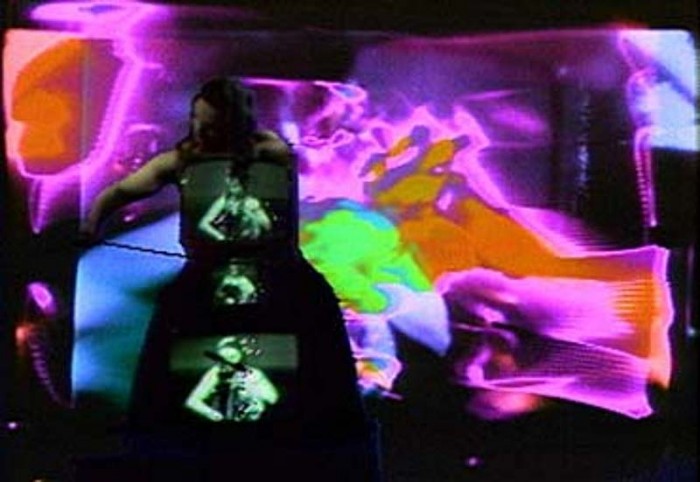