Through series of short provocations and an annotation experiment for pedagogies of vision in human and machine learning “Variation on a glance” by Nicolas Malevé, we will address the question of what research methods are needed to study the networked image and its increasingly hybrid, subjectivised, and highly individuated set of audiences.

Ways of Machine Seeing 2017 is a two-day workshop organised by the Cambridge Digital Humanities Network, and CoDE (Cultures of the Digital Economy Research Institute) and Cambridge Big Data.

Since its broadcast 45 years ago, the BBC documentary series Ways of Seeing has had a wide impact on both popular and academic views on the history of art and the production of images. It presented a radical socio-economic understanding of western art history which was closer to the image itself than previous Marxist critics – helping spread the thinking of Walter Benjamin in the English-speaking world. The analysis offered by presenter John Berger and his collaborators in the documentary is founded on technologies (oil paints, photography) and the ways in which they both reflect and create visual-ideological paradigms, or Ways of Seeing; we seek to explore, half a century later, how these concepts can be understood in the light of state-of-the-art technical developments in machine vision and algorithmic learning.

Can Berger’s assertion that “every image embodies a way of seeing”, be brought into fruitful dialogue with the concerns of researchers exploring contemporary technologies of vision, in a world where the theorisation of vision as a series of information-processing tasks profoundly affects the creation, reception and circulation of all kinds of images? Does this require a perspective going beyond robots which “see” in order to work in a factory, through self-driving cars, recognition and response to embodied human experience, to understanding the cultural meaning of images that have been selected algorithmically, and the question of how the reciprocal nature of vision is affected by the intercession of new kinds of filters between viewer and viewed?

Centre for the Study of the Networked Image, London South Bank University

“If the new language of images were used differently, it would, through its use, confer a new kind of power.” John Berger. (1972) Ways of Seeing, P33

John Berger’s BBC broadcast experiment ‘Ways of Seeing’ argued that vision and seeing are essentially meaning making activities. Revisiting this understanding of the reproductive and cultural modes of seeing now in computational culture is timely, not least because Berger was concerned with a politics of culture that required new ways of thinking and acting.

Indexical and archival representation of a unique point of origin is no longer a sustainable definition for the image and yet its reproduction in culture persists, cloaking the reality of image production as an unspoken set of allegiances between human and machinic agents. This complex of agents can be termed the networked image and considered as a way of seeing. Working out epistemological and ontological accounts of the entanglements between computational and cultural languages is needed in order to identify and translate the politics and power of the networked image.

Through series of short provocations and an annotation experiment for pedagogies of vision in human and machine learning “Variation on a glance” by Nicolas Malevé, we will address the question of what research methods are needed to study the networked image and its increasingly hybrid, subjectivised, and highly individuated set of audiences. Recognising this supposedly non-representational public at work with networked image we will critically engage with pedagogies of machine seeing and increasing monopoly of machinic gaze on the networked bodies.

A networked image emerges through the network; its existence is intricately entangled and intertwined with software, hardware, code, programmers, platforms and users. Its distribution process makes the structure, dependencies and meaning of the networked image visible. By following such circular processes, I argue that a network, or being networked, enables the image, but is also a constitutive act. These acts are constructed through a complex, intricate, and interrelated system of networks that presents an assemblage of art, technology, politics, and social relations.

The notion of authenticity or aura, seem to completely loose all relevance in this unstable and variable environment. However, while recognising the disadvantages and controversies around its importance, I believe that the notion of authenticity is still useful when defining the construction and the act of the networked image. By taking advantage of the ‘variable nature’ implicit in defining authenticity (Lowenthal), and following Deleuze and Guatari’s notion of the assemblage, I want to propose the notion of ‘authentic alliances’. Analysing the alliances or relations between components, either human or non-human, emphasizes the characteristics of the networked image in particular its ability to develop, unfold and mutate.

Although the most common used identifiers for authenticity (what the work consist of, who is the author and when is it made) do not necessarily give an indication of the authenticity in networked images, it is in the alliances inside and between these concepts that authenticity can be identified. This addresses the layered nature of these images, and stresses that different elements should not be identified as singular entities, but as influencing each other. Alliances underline the intertwined structures that constitute these practices and allow for a new logic of authenticity to be identified.

The concept of alliances requires a reconsideration of Benjamin’s concept of the aura. For networked images, which are iterative and based on versioning and repetition, the binary division between original and copy makes little sense. Such images are instances in a line of other images. It is through the network that meaning and value are derived. In these cases reproduction has aura, and originality is identified through copying (following Latour and Law). Thus, authenticity cannot be found in singularity, nor should it be used to enforce a binary opposition, but it can be identified in the ongoing dialogue between the open-endedness and its multiple producers. In this sense, traditional categories of author, human and machine agencies, the singularity of the object and the functionality of date explode in networked art, but at the same time they open new ways of looking at authenticity, prioritising questions about ownership, authorship and copyright.

I’ve been thinking how to best describe or illustrate this relational, entangled and networked environment and found inspiration in Italo Calvino’s Invisible Cities [on a side note, Calvino was a great admirer of Berger]. Using his words and narrative and slightly changing the topic – of course in line with variability and the value of the copy – I hope it will reveal the networked image:

The networked image consists of relationships between the measurements of its space and the events of its past.

As this wave from memories flows in, the networked image soaks it up like a sponge and expands. A description of the image as it is today should contain all the image’s past. The networked image, however, does not tell its past, but contains it like the lines of a hand, written in the corners of the code, the scroll bars of the display, the controller of the tracking pad, the peculiarities of the software, the disparities of the platform, every segment marked in turn with scratches, indentations, scrolls.

Rarely does the eye light on a networked image, and then only when it has recognized that networked image as the sign of another image: like a print in the sand indicates the tiger’s passage; a marsh announces a vein of water; the hibiscus flower, the end of winter.

The eye does not see things but images of things that mean other things: scroll bars point out the measurement of the display; an arrow, the position; a bucket, the colour; a trash bin, delete.

The shortcuts, too, which the software displays in its menu are valuable not in themselves but as signs of other things: a perceptual mask stands for power; a thumb, the like or dislike; the layer for elegance; the question mark, learning; the blingee, voluptuousness.

While you believe you are looking at this image you are only recording the components with which it defines itself and all its parts.

However the image may really be, beneath this thick coating of signs, whatever it may contain or conceal, but you leave the image without having discovered it.

The networked image’s secret lies in the way your gaze runs over patterns following one another as in a musical score where not a note can be altered or displaced.

The networked image is redundant: it repeats itself so that something will stick in the mind.

This networked image, which cannot be expunged from the mind is like a framework, a honeycomb in whose cells each of us can place the things they want to remember.

Between each idea and each point – or node – of the itinerary an affinity or a contrast can be established, serving as an immediate aid to memory.

Memory is likewise redundant: it repeats signs so that the networked image can begin to exist.

To conclude: the networked image can be understood and valued in relations (or ‘alliances’). It executes, acts, and reacts. This is a complex image with kinks, folds, hiccups and slippages, which twist and fold in various directions, creating uncertainty and unpredictable behaviour. Moreover oftentimes the image is intertwined with the specifics of a software programme, and/or the actions of users. At the same time, the image is also a formally specifiable entity, so it has a dual nature.

So, is it helpful to define images as networked? If so, the function of an image needs to be stressed, rather than its physical form. This means that what something is has to be understood in terms of what it does: how it functions within and through machinic, systemic, social and cultural domains. 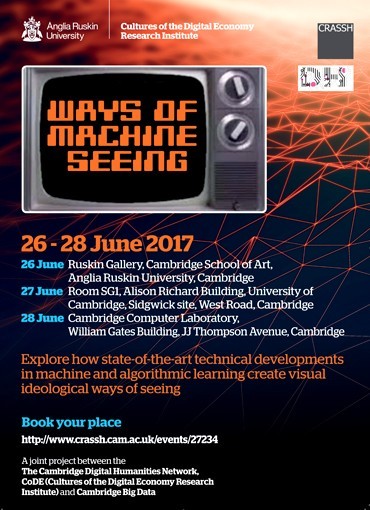