In 2007 Virtueel Platform organised Culture 2.0, an international conference and laboratory to introduce Web 2.0-thinking into the creative processes and strategies of cultural institutions. From a practical starting point – in which ways could the developments be applied in the cultural sector? – we investigated whether embracing Web 2.0 tools and thinking would generate new and other forms of content or approaches – or threaten culture as we know it. Now that the tools are in place and people have begun to find their way, the time had come to investigate more specific experiences and challenges surrounding the Web 2.0 hype. What are the success factors and failures of Web 2.0 and can we imagine and initiate new tools and strategies for the future Web?

Walled Garden was a 2-day international conference that took place in Amsterdam on 20 and 21 November 2008.

A walled garden, with regards to media content, refers to a closed set or exclusive set of information services provided for users (a method of creating a monopoly or securing an information system). This is in contrast to providing consumers access to the open Internet for content and e-commerce. Wikipedia, June 2008

Walled gardens are spreading online while blogs and personal profile pages become over-digested, egocen- tric and retreat to be at best useful sources of infor- mation for marketing agencies. And after an energetic – and usually shortlived – start, most newly formed networks quieten down, losing their spontaneity and momentum. Is this tendency also affecting the accessibility of information and knowledge? The objective of the Walled Garden conference was to discuss terms of public access to the vast databases of information and to explore a sustainable architecture for the avail- ability of tools and information exchange.

In 2007 Virtueel Platform organised Culture 2.0, an international conference and laboratory to introduce Web 2.0-thinking into the creative processes and strategies of cultural institutions. From a practical starting point – in which ways could the developments be applied in the cultural sector? – we investigated whether embracing Web 2.0 tools and thinking would generate new and other forms of content or approaches – or threaten culture as we know it. Now that the tools are in place and people have begun to find their way, the time had come to investigate more specific experiences and challenges surrounding the Web 2.0 hype. What are the success factors and failures of Web 2.0 and can we imagine and initiate new tools and strategies for the future Web?

Reacting to the rising tendency towards online gated and closed communities we wanted to address issues of identity, mobile communities and networks. Many questions arose. What are the social processes underlying these systems and how does the interplay between new technologies and people’s lives vary according to cultures and institutions in different parts of the world and among different social groups? What are the new inequalities introduced by differential access to infrastructure of wireless communication in a world based on connectivity?

Through exploration, experimentation and exchange of knowledge we approached the development and future challenges of the current Web 2.0. Inspiring conversations with a variety of online experts and professionals in the digital field shaped our initial Walled Garden idea. From the very start of the process we set up our own Walled Garden, a semi-closed on- line environment, which allowed the invited experts to continuously feed back on our initial suggestions and influence the parameters of our working process. Strands and topics for the conference were proposed and shaped by collective conversation. Closer to the conference, we opened up our Walled Garden to the public, inviting participants to observe the process. The conference itself consisted of conversations in the form of structured group dialogue, open plenary sessions, discussions and face-to-face meetings with artists, researchers, theorists and technologists.

So, what did Walled Garden teach us about the future public garden?

Knowledge and awareness
It became clear that the level of knowledge and awareness among large parts of society about the implications of the use of social networking sites is very low. Apart from an urgent need for education on the basic practicalities we need to consider and question how individual data and profiles will be used in the future. ‘The next war might be a Data-War.’

Networks and experimentation
Network experimentation takes place within the mixed ecology that many artists, designers, programmers, researchers inhabit while intervening and playing with proprietary formats and commercial processes. Networks can be regarded as open laboratory models that offer space for early innovation, and which will emerge and become visible to much larger audiences. These sites for public experimentation did not exist previously, and whilst there are still constraints, there is a need to increase the degree of access if we want to facilitate growth and
development.

Innovation and knowledge distribution
Much online innovation stems from a combination of user-generated activity and commercial systems. However, currently there is lack of qualitative data, evidence and empirical research regarding the use of Web 2.0 tools. Mapping and data visualisation methods prove valuable in tracing the often still messy boundaries and walls, finding the lay of the land and identifying where innovation can occur. There is a potential role for intermediaries to broker and negotiate in these spaces for knowledge and information exchange.[1] The key challenge is how to regain agency in these spaces and gain more knowledge about what is currently happening. It is crucial to improve and strive for more network literacy and establish rules of engagement.

Future and past
Walled Garden suggested that our future lives will entail a whole range of new challenges: Facebook Sentimentalism; Scalism Sects (moving from the nano to the galactic); Time Shifting (living at different time zones at will); or Surrogate Selves (taking over decisions for you). Fictionalise what might happen and then experiment to explore these frontiers of science and future: unexpected futures come from unintended events.

Although our Walled Garden provided fertile soil, we felt there was an array of questions that had been touched upon but not expanded on, and invited our fellow gardeners to stroll, ponder and dig deeper. So, with the following questions in mind and the outcomes of their working groups we asked each of the moderators to write an article, based on the following questions:

– Supposing that we have reached a plateau, and what were once innovations have now settled into patterns of informal and familiar use: What future developments are on the horizon, and what are opportunities and challenges?

– An important step is to find and establish ‘agency’ in online environments. To what extent could (media) artists, practitioners, researchers influence next steps?

– Under the assumption that we might have already entered a new phase of working, how can we acquire new ways of thinking and become aware (of the implication) of changes?

This publication, the articles together with reporters’ notes, quotes, photos, and complemented by our online Walled Garden should be seen as seeds for thought and future gardens. While the exploration has started, it is still a long road towards implementation.

Thanks to our fellow gardeners – moderators, presenters, reporters and participants without whom the garden will not flourish. 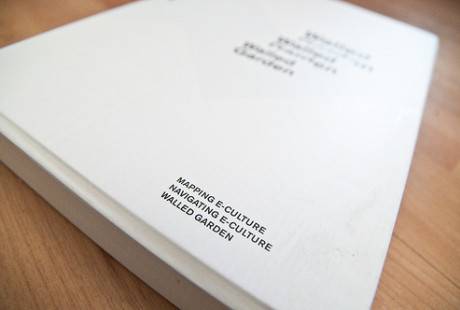