Silke Wawro, a student doing her final examinations at the Rietveld Academy in Amsterdam, exhibited her graduation project VOLKSWARE in a trial installation at the Netherlands Media Art Institute.

Old, worn out items of clothing are central in this project. Visitors bring around their favourite pieces of clothing, filling in a formula with questions about the memories and emotions that are connected with them. Next the item of clothing receives the VOLKSWARE label, and in this manner a new line of clothing is born. Subsequently each item is scanned, photographed and the results archived. A digital report can be seen on the internet at the address www.volksware.org.

In addition to the website, a special catalogue will be appearing at a future date.

To date more than 100 people have come forward. A question for Silke: What does Volksware mean for you?

As a graphic designer you’re always involved with two-dimensional work. In my projects I still work only with elements from graphic design. What fascinates me is how you can use these means with 3D objects. The region between 2D and 3D is what I want to investigate; when is something still flat, and when does it become spatial?

Clothing is fascinating. I could also have chosen coffee pots as spatial objects. But the texture of fabric is much more exciting for me. I try to analyse the clothing, see how the material looks, but most of all I try to catch the sensation that arises as you touch various fabrics.

Do you want to start a new fashion line yourself?

No way! The bottom line is that I don’t make clothing myself, and also I am not a fashion designer. What it’s about for me is to get to understand ‘anti-fashion.’ Everybody has things in the closet that he or she would never be able to bring themselves to part with. Even the most with-it and fashion-conscious people sometimes walk around in clothing that is totally worn out or out of fashion. With my project Volksware I have the evidence that a tendency exists in fashion that has nothing to do with the prevailing trends.

For you, what was the most striking item of clothing?

Yesterday a young guy came along who said that his jacket had bees stolen. We asked him what he had come around to us for, in that case. Then he told us that he had let us archive his jacket. We looked immediately, and indeed the jacket was recorded there. Now we are busy mailing all ‘Volksware members’ asking them to be on the lookout for a jacket with archive number 10/02. If we have enough time, we’re going to put out ‘wanted’ posters in Amsterdam for it.

What are your future plans?

Together with Kirsten Hermans I have opened the first Volksware store/workspace (1st Jacob van Campenstraat 28h). People can come along there, bringing their clothing.

Further, there are plans to work together with a pair of famous designers, but unfortunately I can’t say anything more about that for now. And then there is my graduation presentation at the Rietveld Academy… 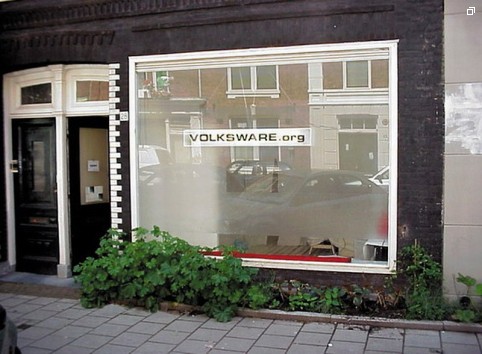