The exhibition video vortex is the Netherlands Media Art Institute’s response to the Web2.0 phenomenon. Web2.0 stands for power to the user and democracy for everyone. It has led to innovative forms of media use in which an open and playful collaboration can lead to critical positions and new ideas.

The Netherlands Media Art Institute seizes upon these developments with a new exhibition model. Stimulation and participation within network environments is the point of departure. In addition to presenting existing installations, short workshops and presentations are given every day. In some cases the artworks form the starting point for a workshop, while in other cases the medium used is the subject of a workshop. Collective experience and building shared knowledge is an important focus in all the projects. In this manner, in the form of continual exchange of ideas, culture can change, renew itself and survive.

The Netherlands Media Art Institute has recently emerged as an experimental place where projects with a participatory aspect can be presented: in other words: do it yourself, with others! The artists are responding to developments such as YouTube, MySpace and Blogger, mobile video telephones and the influence of live webcam streams.

‘Curator for One Day’ For the duration of the project everyone can take on the role of curator. For this period the Netherlands Media Art Institute is making its whole collection available to the public. Through the Institute’s online catalog one can make a selection from the more than 2000 video works. By means of a specially developed interface, in the gallery space one can choose a maximum of six video works to be shown on a day one selects. The only condition is that a rationale be given for the selection. This statement and the video works selected are then screened for the rest of the visitors for a whole day.

Graham Harwood (UK) – Netmonster. How is a network image created? NetMonster is a software developed by Graham Harwood (Mongrel / Mediashed). The software was developed to generate, edit and continually update content. The outcome is a complex of visual compositions comprised of results from internet searches. Collectively individuals build a ‘networked’ image that consists of a collection of pictures and texts that come from all over the internet. 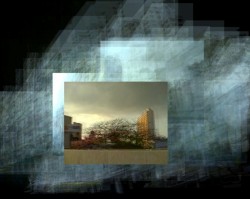 Giselle Beiguelman (Brazil) – Sometimes. Giselle makes degenerative video that disintegrates and changes as a result of input from the users. Video images that were made with a mobile telephone can be edited with a keyboard and mouse in the exhibition space. After that a new montage is created live, in which the order of the original frames changes.

Beatrice Valentine Amrhein (France) – Video Lustre. For Beatrice Valentine Amrhein the mobile telephone symbolizes intimacy, intrusiveness and directness. She sees the video in the mobile telephone as her third eye, with which she looks at reality in a different way. She also employs the low resolution that is inherent to the medium in order to alter our perception. The installation Video Lustre is comprised of dozens of mobile telephones that hang from the ceiling like a chandelier. The mobile videos show various fragments of the body in close-up. A new interpretation of the body is created through this netwerk of mobile telephones.

Walczak & Wattenberg (Sweden & ???) – NoPlace. People are creating and collecting information all over the world. Blogs, online photo albums and social bookmark pages such as del.isio.us supply an enormous diversity of data. The installation No Place uses the raw material from all these data streams to create various versions of a paradise. New worlds are created, built up in an architecture that refers to the future.
Walczak & Wattenberg / NoPlace

Check the website for the precise dates and times!

The Duellists is a Mediashed film Directed by David Valentine, Soundtrack by Hybernation

Saturday 20 October: Mobile Art
Presentations by artists that show work in the exhibition Video Vortex will tell about the background and ideas of their work. Artist Grahame Weinbren will give an introduction.

Thanks to:
VSBfonds
Powered by BeamSystems
Amsterdams Fonds voor Kunst