For VFC_Berlin a network of artists was asked to reflect in a personal way on the recent events in their region and relate these events to ways in which the world has changed in the two decades since the fall of the Berlin Wall.

Visual Foreign Correspondents Berlin is the latest in a series of projects initiated by the Visual Correspondent Foundation in cooperation with WL Projects Berlin in which networks of high-profile public media platforms have been developed as specially curated spaces. In VFC_Berlin we invite a network of artists to reflect in a personal way on the recent events in their region and relate these events to ways in which the world has changed in the two decades since the fall of the Berlin Wall.

Now that the spectre of economic crisis and heightened religious differences once again are threatening to create new sets of barriers there has never been a better moment to reflect on just how much is at stake when we erect boundaries (either tangible or intangible) between nations, peoples and idea’s. In the light of this anniversary we will be asking the artists to reflect on the nature of boundaries and borders, virtual and real, which are destroyed and (re) constructed in this era of intense volatility.

What is important to this project is the thought that artists, with their specific talent for visual language can take another role that of the commentator, ‘the visual correspondent’ and can give visual commentary on the state of the world today. Above all show this comment on a public platform outside a usual museum or gallery context.

It goes without saying that the fall of the Berlin Wall was one of the most momentous political and symbolic events of the late twentieth century, one of those rare events when political significance and human symbolism are inseparable. At the time it seemed that the era when naked centralized power could impose itself, from the top down over the populations of Europe, was over. Moreover it seemed Europe’s east and west could meet in open exchange and grow towards a better understanding of each other. In an era of easy cynicism it is easy to forget how much genuine hope was invested in that unique action of the human spirit’s desire to break down barriers. The fact that the history of all the contemporary arts have been driven by the desire to challenge and problematize all boundaries make this anniversary a moment for both artists of the generation who lived through those events as well as those of a younger generation to use their work as a instrument to reflect on the impact of that unique moment.

VFC_Berlin has commissioned seven artists to make screen-based works looking at specific boundary or border -related issues in their home country. For this selection we sought not only regional diversity but also selected artists on the basis of their interest in a specific types of issue combined with their proven capacity to make works compelling and immediate enough to successfully compete for attention in a modern media landscape.

Starting September 21st over a period of seven weeks leading up to the anniversary of the Fall of the Berlin Wall, a series of seven screen-based works will be presented on both urban screens and online. Each week a new work will be shown until finally the whole series will be presented together. 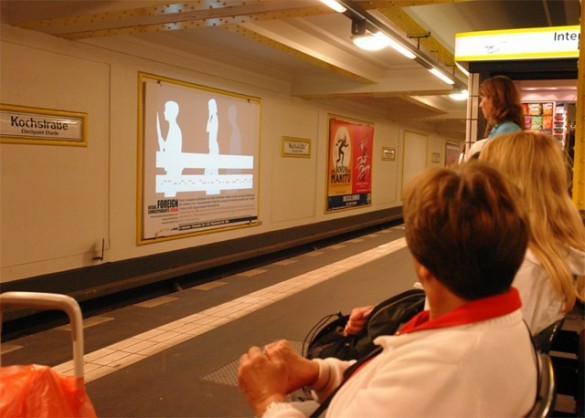