Reflecting on Morehshin Allahyari’s use of technology as a political medium, Özge Ersoy, Christina Varvia & Sarah Nankivell and Nour A. Munawar will present their views on what could be a decolonialist practice. They will show how re-use and re-interpretation allow for a new set of values to emerge in which destroyed objects, and their users, regain agency through digitisation.

The Photographers’ Gallery in collaboration with the Centre for the Study of the Networked Image
Friday 9 June, 18:00
Curated by Annet Dekker

Trafficking of cultural heritage is nothing new. It ranges from the looting of archaeological sites, theft from cultural heritage institutions and private collections, and the displacement of artefacts due to war. Recently a new phenomenon can be added to this list: the filming of destructions of “fake” ancient relics, while the originals are quickly and illicitly traded.

Following the release of such videos by ISIS, many Western nation states reacted with outrage and responded by attempts to digitally preserve or rebuild of some of the remains. While adopting conventional methods of appropriation, and ignoring their own role in these (fake) destructions, a new player entered the marketplace: commercial companies specializing in 3D modelling and printing.

The possibility of generating detailed copies of an artefact without the need to access it brings undeniable benefits in terms of its accessibility and preservation. It allows people access to lost ‘treasures’; a digital model can capture the appearance and shape of an object in a way that a 2-dimensional representation could never do. Rather than being committed to the preservation of cultural heritage it could be argued these companies are profiting from the reselling of copyrighted files. Drawing attention to the importance of a freely shared memory and using the power of technology, artist Morehshin Allahyari devised her own method to counter what she considers to be a new ‘digital colonialism’. Based on found footage from exhibition catalogues, tourists’ snapshots and using her imagination, she created 3D visualization models from scratch in her project “Material Speculation: ISIS”. Realised as 3D printed sculptures, these cultural objects have the documentation of their creation embedded on a flash drive inside the model, which has also been shared by Allahyari online for others to use.

Reflecting on Allahyari’s use of technology as a political medium, the panelists will present their views on what could be a decolonialist practice. They will show how re-use and re-interpretation allow for a new set of values to emerge in which destroyed objects, and their users, regain agency through digitisation.

Özge Ersoy is a curator and writer based in Istanbul. She is the programme manager of collectorspace, a non-profit organisation that aims to foster critical discussions and writing on contemporary art collecting practices, and works as the managing editor of m-est.org, an online publication conceived as an artist-centered initiative. Her main research revolves around the question of how art institutions shape artistic production and how artists influence the way institutions evolve over time. Ersoy holds an MA from the Center for Curatorial Studies, Bard College, and a BA in International Relations from Bogazici University and Binghamton University. She is currently doing a research residency at the Delfina Foundation in London, with support from SAHA Association.

Nour A. Munawar is a PhD researcher in Archaeology at the University of Amsterdam (UvA). Originally, he is Palestinian – Syrian, born and raised in Aleppo city. Nour’s PhD project mainly focused on: “The (Re)construction of Syrian and Iraqi Cultural Heritage in Post-Conflict Contexts”. He is an expert with The United Nations Educational, Scientific and Cultural Organization (UNESCO) in the field of Safeguarding the Syrian Cultural Heritage. He is, also, a member of The International Council on Monuments and Sites (ICOMOS-Nederland).

Sarah Nankivell joined Forensic Architecture in 2017 as Programme Manager, having previously worked at B+H Architects, The Metropolitan Museum of Art, and The Aga Khan Museum. She is a graduate of the University of Toronto (BSc.) and the University of Cambridge (MPhil., Heritage Studies), where her research focused on the destruction of heritage sites in conflict and the discursive representation of these events through the media. In addition to her work at Forensic Architecture, Sarah is currently coordinating an upcoming exhibition for the University of Cambridge Festival of Ideas 2017, which will investigate the nexus between heritage and truth through the reconstruction of Syrian heritage.

Christina Varvia is an architect, researcher and the Research Coordinator at Forensic Architecture. She has graduated from the Architectural Association with a previous degree from Westminster University. Her previous research includes studies on digital media and memory as well as the perception of the physical environment through scanning and imaging technologies, research that she deploys through time-based media. After having worked in architectural practice, Christina joined the Forensic Architecture team in 2014, where she developed methodologies and undertook video analysis that lead to the Rafah: Black Friday report, unpacking one day of war in Gaza, 2014. She has since coordinated the Saydnaya: Inside a Syrian torture prison project, FA’s Venice Biennale participation, as well
as other projects and exhibitions.

Annet Dekker is Assistant Professor at the University of Amsterdam, Media Studies: Archival and Information Studies, Visiting Professor at LSBU, and freelance curator. She worked as researcher Digital Preservation at Tate, London, core tutor at Piet Zwart Institute, Rotterdam, fellow at Het Nieuwe Instituut, Rotterdam, and head of exhibitions at Netherlands Media Art Institute. She publishes widely on issues of digital art and preservation, and has edited several publications, among others, Lost and Living (in) Archives (2017), Speculative Scenarios, or what will happen to digital art in the (near) future (2013), and Archive 2020: Sustainable Archiving of Born Digital Cultural Content (2010). http://aaaan.net/

The Centre for the Study of the Networked Image (CSNI) brings together a group of researchers who are seeking new knowledge and understanding of how network and computational culture has and is changing the production and reception of art and photography.

Image credit: She Who Sees The Unknown: Ya’jooj Ma’jooj (2017) by Morehshin Allahyari. 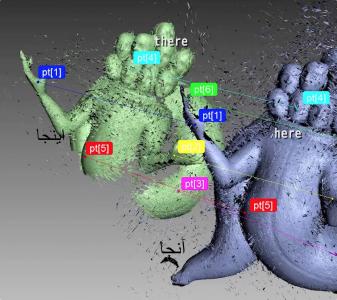