The Pleasure of Language

The popularity of chatrooms on the internet and the speed of electronic mail have led to an enormous growth in communication, and with it, changes in the use of language and the creation of countless vernaculars. The Netherlands Media Art Institute organises from August 24 untill September 28 The Pleasure of Language. In this exhibition the artists are concerned with language in various manners. The artists respond through image, text and sound to and participate in the ways language-use as well as the communication process are changing. By means of image, text and sound they both respond to and participate in the ways language use and the communication process are changing. A number of works reflect the body of thought and ways of working of artists from the beginning of the last century, placing these ideas in a contemporary perspective, employing new technologies.

In his installations the audio artist Brandon LaBelle focuses on the dynamics of spaces, objects, bodies and language. His interest is primarily in the harmonic possibilities of language: how the various consonants and vowels collectively form an architectural whole that enables us to form words and sentences, and subsequently how they achieve and influence communication. In his new installation Over/Hear his attention shifted to that what is been said.

The Hungarian/German artist Péter Frucht is fascinated by the misunderstandings that arise in communication. Influenced by his long presence in chatrooms, in his installation iow inanalbipootv mmif with mftw ibn and cotlflgohaha isbt (2001) Frucht captures the endless talks and conversations that take place all over the Internet.

He brakes into conversations and extracts parts, which he then graphically styles in different formats before letting the different parts flow into a virtual 3D world. The result is a wave of live chat that can be mixed and linked together by the visitor, through which new dialogues become audible.

MEZ (Mary Anne Breeze) produces e-poetry on the internet which she herself terms m[ez]ang.elle. M[ez]ang.elle is a game with language, supported by sound, symbols and text, which arises from abbreviations that are current in e-mail and SMS communication. 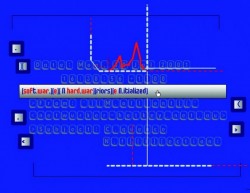 The words are altered in a manner that reflects the fundamental meaning of the word and lets new associations arise. Her language is based on English and contains mathematical, programming and other language codes, in order to develop a language specific to internet.
http://www.cddc.vt.edu/host/netwurker / http://www.hotkey.net.au/~netwurker

For the exhibition Netochka Nezvanova has collaborated with Jaine Evans to produce the interactive installation Hypoderm (2002). Hypoderm allows the visitor to control and reveal bodies of text through establishing a physical language of presence, absence and movement.

Bodies of descriptive text are built up through the placing of words and sentences in an associative relationship with one another, in a way that is determined by each individual viewers movements. In this way visitors create a fluid, ever changing descriptive body of text.
http://www.steim.nl 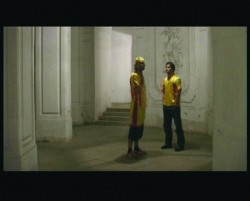 Playing the tape back to several people their song provokes diverse translations, memories and interpretations, which she layers over the original recording. The acoustic linking of languages and musical sounds produces a hybrid soundtrack understood more as texture than as text or song, while the apparent wholeness of the song is revealed as a patchwork of non-sequiters, grammatical slips and inconsistencies

At the opening: KKEP with See You
Under the name KKEP, Selene and Stef Kolman have been making their own projects in public space. KKEP is known for their innovative way of working, in which they make use of various channels, from television to Internet and handhelds.

KKEP’s work consists of a combination of art, advertising, news and entertainment. For the exhibition KKEP uses the SMS protocol to personalise mobile phones with an image of the user’s eyes. First send a txt.file to the handheld, the code transfers automatically into an image of the photographed eyes.

In addition to current works, a number of works from the early days of video art from the Montevideo collection will be shown on monitor. Recordings of performances by Laurie Anderson and Carolee Schneeman, and video works by Vito Acconci and others will show how artists employed language in their work in the past. 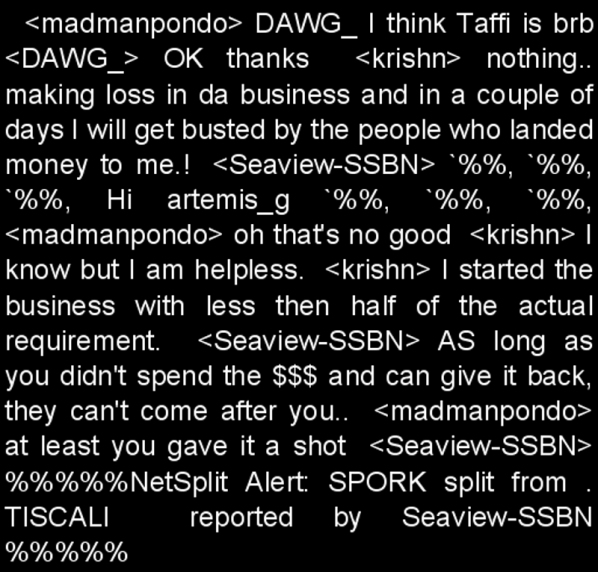