The CD-ROM Cabinet after 6 months…

Since late 2012, Sandra Fauconnier and Annet Dekker have been working on the CD-ROM Cabinet, an initiative to safeguard artistic CD-ROMs from the 1990s. Here’s a report of the first activities in this project.

Throughout the 1990s the CD-ROM, the predecessor to the DVD, was a popular medium for interactive content such as games, encyclopaedias, business presentations, educational software and art. That decade saw a blossoming of a remarkable and largely uncelebrated niche in digital art production: CD-ROM art – interactive artworks produced specifically for the CD-ROM medium. 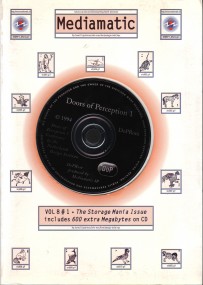 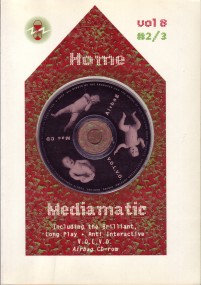 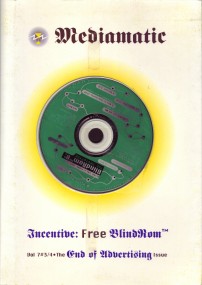 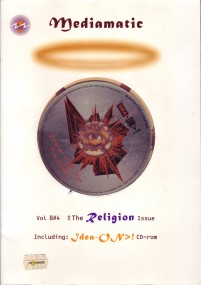 In the Netherlands, Mediamatic was an important producer and driving force behind this kind of work. Art CD-ROMs appeared as supplements to Mediamatic Magazine. Participating artists included Yariv Alter Fin, Mari Soppela, JODI and Gerald van der Kaap. There was also significant production of artistic CD-ROMs during the 1990s in other countries, particularly in the US, Canada and the UK. Big names such as Antoni Muntadas, Laurie Anderson, Valie Export, Michael Snow, Chris Marker and Zoe Beloff all published interactive works on CD-ROM, with multimedia publisher Voyager playing an essential role. Finally, there was a small but thriving scene of experimental productions by less well-known artists and collectives including Antirom, Morton Subotnick, Linda Dement and many others. They were true pioneers in this area.

A huge diversity of work has been produced for CD-ROM. It includes virtual spaces, game-inspired experiments, interactive musical environments, literature, and hypertext presentations by artists. They are early multimedia experiments in which artists freely explored a wide variety of interaction patterns and visual languages that would only become mainstream decades later.

CD-ROM artworks often occupy a special place in an individual artist’s oeuvre. Sometimes they are a unique interactive excursion in an artist’s career, as was the case for Laurie Anderson and Michael Snow. They may also form part of a larger series of works in a variety of (off-line and online) media dealing with a similar theme and method (JODI and Antoni Muntadas).

Seen as a whole, projects on CD-ROM form a remarkable and exemplary case for the conservation of digital art: the projects are all fairly small-scale and manageable; they’re all based on old but nonetheless fairly standard Windows or Mac software; and there is generally a concrete physical component that make the object saleable and collectable – CD-ROM discs usually come in specially designed packaging. With minimal effort and technical knowledge it is now possible to save these projects from obscurity, to conserve them and make them available in as authentic a state as possible.

Fragile: a matter of urgency

Many CD-ROM artworks are still available through living private collectors and still extant organisations, but they can also be found on online auction sites. Many of the artists are still alive, and several projects are still fresh in the memory of devotees of the form. Enthusiasts have already ensured that an extensive collection of mainstream shareware CD-ROMs can now be found on the Internet Archive. A collection of experimental artistic CD-ROMs would be a valuable supplement to this collection.

Even though it is still possible to find emulator software that play CD-ROMs, thanks to active online communities of enthusiasts and hobbyists who want to keep old computer games functioning, the greatest obstacle – and the reason for haste – is that it will soon be impossible to run CD-ROM discs due to the rapid evolution of hardware. Increasingly, PCs and laptops are no longer even equipped with DVD drives! Most important of all, the maximum physical lifetime of the disc is no longer than a few decades.

In late 2012, I (Sandra Fauconnier) have started inventorizing a selection of CD-ROMs, as a hobby and out of love for this almost-forgotten artistic medium. After a few months, this became a real project – The CD-ROM Cabinet – mostly thanks to the enthusiasm, skills and organizational talent of Annet Dekker and Ben Fino-Radin, but also with great support from Annette Wolfsberger, Gisela Domschke, Arie Altena, Gaby Wijers, Aram Bartholl and Robert Sakrowski. A mediator grant from Mondriaan Fonds made it possible for me to do this not just as a volunteer, and to see this project even more as an contribution to our public, shared, cultural heritage. Thank you! 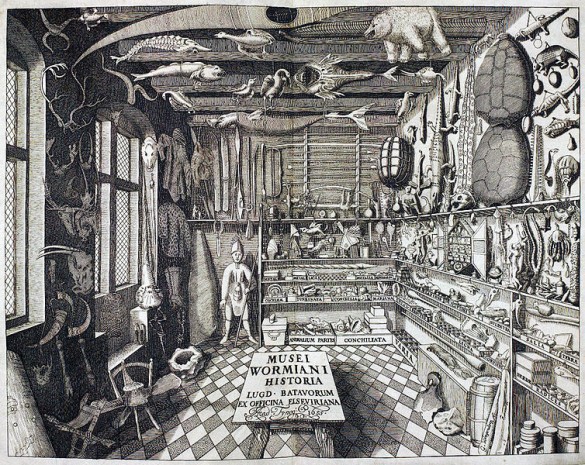 I use the word ‘Cabinet’ to acknowledge the art cabinet as a historical phenomenon. Popular in the 17th and 18th centuries, individual collectors maintained ‘Cabinets of Curiosities’ to house and display their personal art treasures. This personal approach to collecting art preceded and caused the emergence of cultural institutions such as museums, galleries, art organisations and festivals. I see in this phenomenon a clear parallel with the contemporary reception of Internet and CD-ROM art, because once again the interests and expertise of individual enthusiasts and researchers are well ahead of institutional developments.

With extra special thanks and kudos to Hicham Khalidi, who suggested this term as a title for this project!

The research was executed in a period of approximately 8 months, perhaps one day per week. This is a short time. So, the work was typically:

A first inventory of CD-ROM art in our surroundings

How many art CD-ROMs have been produced between, say, 1993 and 2001? Hard to say, but it is probably a manageable number – several hundreds, perhaps.

An eager soul has created this gargantuan overview of notable CD-ROM productions done with Director, not just artistic ones. The list was taken down in mid 2012 and is now only accessible via the internet archive.

Such a list was a good inspiration for us to create our own inventory: first an informal Pinterest board, and then a Google Spreadsheet with a list of important titles that we could either remember, find in common literature, or of which we could find copies in collections around us. You can view the inventory spreadsheet in its current state here. It contains (October 2013) 82 art CD-ROMs, mainly from the archives and collections of NIMk, V2_ and a few private people. 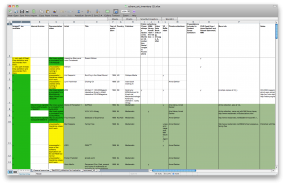 Want a copy, or want editing access? Let us know.

CD-ROM exhibitions in the 1990s

In the 1990s, CD-ROM art has been presented in the following events. When their websites and/or catalogues still exist, these events give a good indication of which CD-ROMs were deemed interesting and important at that time.

On 23 November 1995, V2_ Institute for the Unstable Media in Rotterdam organized CD FoROM, a presentation and small exhibition of remarkable CD-ROM artworks. This one-time event was part of the larger Dutch Electronic Art Festival of that same year.

In March-July 1996, the CD-ROM art exhibition Burning the Interface was first installed at the Museum of Contemporary Art in Sydney, Australia. The exhibition was curated by Mike Leggett, who has some interesting documentation about the exhibition on his personal website: scans from the catalogue, and this incredibly valuable video registration of visitors going through the exhibition. This is how CD-ROM art could be presented in the mid-1990s.

Contact Zones. The Art of CD-ROM, curated by Timothy Murray, was a travelling exhibition from 1999 to 2001 in which several of these pioneering works were presented together. The exhibition website still exists and is an excellent record and source for several projects.

You can find a good selection of art CD-ROMs at the following publicly accessible libraries and archives:

CD-ROM artworks ported to the web

Since the early to mid-2000s, it has become increasingly difficult for average computer users to consult CD-ROMs on their own machines. Mac OS X v.10.0 was released in March 2001, and the gradual disappearance of Mac OS 9 and the Classic environment in OS X would soon make most older CD-ROMs unplayable on Apple computers. For Windows users, this situation was less urgent, but nevertheless, for an increasingly larger audience CD-ROMs became difficult to consult.

In the mid-2000s already, some artists and organisations were quite aware of the artistic value of several of their older CD-ROM-based art projects, and have ported them to the web – which usually meant reprogramming them so that a website would re-create the experience and interaction of the original work. Three notable examples are: 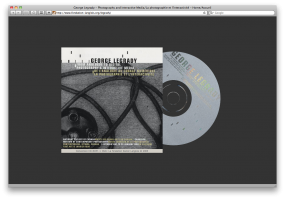 George Legrady: An Anecdoted Archive from the Cold War – CD-ROM from 1997, ported to the web by the Daniel Langlois Foundation in 2005. 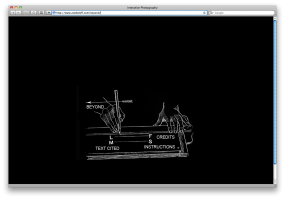 Zoe Beloff: Where Where There There Where – CD-ROM from 1998, ported to the web under commission from the artist (?) in 2010

A renewed interest in artistic CD-ROMs in 2012: INSERT DISC 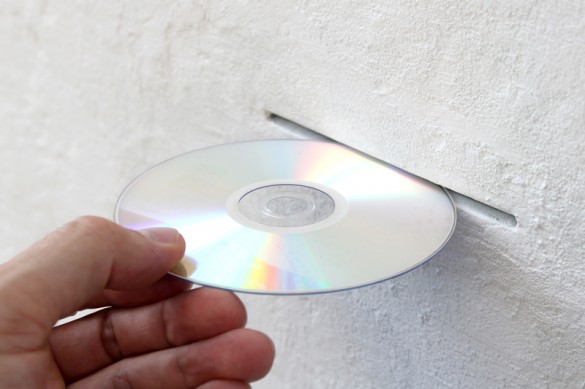 At the same time when the CD-ROM Cabinet as a project took shape, artist Aram Bartholl held a series of interventions – DVD Dead Drop – at the Museum of the Moving Image in New York. DVD Dead Drop #2  was entitled INSERT DISC and consisted of a burnable DVD with an emulator and disk images of four notable CD-ROM artworks:

On 12-13 December 2012, Annet Dekker in collaboration with Baltan Laboratories organized a CD-ROM hackathon at the Van Abbemuseum in Eindhoven. The workshop was led by Ben Fino-Radin, then Digital Conservator at Rhizome, who introduced the principles of disk imaging and emulation. The invitation and the report (in text and video) can be found on the website of Baltan Laboratories.

After the hackathon was finished, it became clear that it would be doable – and very useful – to create as much documentation as possible from the CD-ROMs that were physically gathered at that point.

Sandra Fauconnier has, in a period of 6 months, created ‘documentation packages’ of a selection of works, which typically consist of

An overview of all documented cases will be available on this website soon. Which CD-ROMs were selected for documentation?

The work is not done!

Many prominent CD-ROM artworks remain undocumented, such as several ones published by Voyager; the artintact series, and many key pieces such as the notable anti:rom, the Blam! series, and many many more.

This is a job that should not only be covered by a small group of researchers in the Netherlands; we encourage other researchers and institutions to tackle this task as well. We hope that the philosophy behind our work for the CD-ROM Cabinet resonates: we have attempted to not create yet another new ‘database silo’ but have, instead, opted to publish the documentation on existing and, hopefully very accessible and sustainable, external platforms.

In these first months of the CD-ROM Cabinet, many technically difficult works were not documented – notably, works with many Quicktime movies and multi-image discs are difficult to emulate correctly. The inventory is incomplete. And an encompassing art historical overview is due: a study that demonstrates how many of these works predate and pioneer current innovations in interactive storytelling, apps and ebooks. It would also be very interesting to see an art historical study that dives into the not yet described history of ‘intimate’ digital artworks that have been specifically created for common personal computing devices: desktop computers, laptops, and more recently smartphones and tablets. 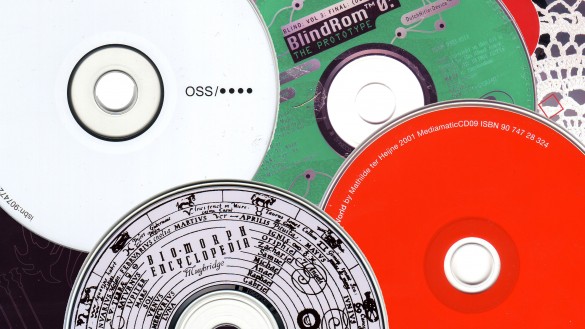