Catwalk is a video about bio-diversity. It presents long parades of different kinds of species, all transformed into the same size. You can’t but wonder what all these different life forms have in common, or not. Mäkipää critiques the issue of “equal versus difference” by celebrating the diversity of life-forms and their manifestations, while teaching its viewers that they are not subject to any hierarchy. In her work human kind is its own enemy – unable to establish an environmentally sustainable lifestyle. As Sukhdev and many others are warning us, we need to find solutions to act. At the moment the planet is used to create luxurious living conditions. Destroying everything that is in the way, in the process creating a waste dump that soon might overtake us by its own means. With her art Mäkipää subtlety presents us with a visual metaphor that is sharp, humorous and serious at the same time, designed to make the viewer act.

An interview with Tea Mäkipää
by Annet Dekker

Part of Visual Foreign Correspondents, a collaboration between the Visual Correspondence Foundation, NIMk and De Balie

Recent events
This year even the Western European world became aware of the importance of food issues. This time not within a diet setting but on an economic, political and social level. The dramatic rises in world food prices that started in 2007 created a global crisis in 2008 causing political and economical instability and social unrest in both poor and developed nations. This coincided with the practical problems of waste disposal in Napels that contaminated the city and bringing attention once more to the dangers of contaminated mozzarella production. All of a sudden waste – and food – became urgent matters.

Around the same time the TEEB (The Economics of Ecosystems and Biodiversity) report came out written by Pavan Sukhdev (economist of the Deutsche Bank). Sukhdev said the interim report showed that “we are trying to navigate uncharted and turbulent waters with an old and defective economic compass and that this was affecting our ability to forge a sustainable economy in harmony with nature.” The report demonstrates that if we do not adopt the right policies, the current decline in biodiversity and the related loss of ecosystem services will continue and in some cases even accelerate. Some ecosystems are likely to be damaged beyond repair. With a “business as usual” scenario, by 2050 we will be faced with serious consequences.

It is time for a wake-up call to face the mess that is created – it is too late not to act. In light of the above the Globalised Crystal Ball organized a special issue around “The Future and Food security” (September 11). Within this framework Visual Foreign Correspondents asked Finnish artist Tea Mäkipää to show a remake of her work Catwalk. As in Mäkipää’s other work the central focus is on topics of survival tactics and social behaviour of both individuals and the human species as a whole in living together with other species.

Catwalk is a video about bio-diversity. It presents long parades of different kinds of species, all transformed into the same size. You can’t but wonder what all these different life forms have in common, or not. Mäkipää critiques the issue of “equal versus difference” by celebrating the diversity of life-forms and their manifestations, while teaching its viewers that they are not subject to any hierarchy.

In her work human kind is its own enemy – unable to establish an environmentally sustainable lifestyle. As Sukhdev and many others are warning us, we need to find solutions to act. At the moment the planet is used to create luxurious living conditions. Destroying everything that is in the way, in the process creating a waste dump that soon might overtake us by its own means. With her art Mäkipää subtlety presents us with a visual metaphor that is sharp, humorous and serious at the same time, designed to make the viewer act.

AD : You come from Finland, a country that we know as being well structured with a relative tightly locked safety net of institutions to help citizens in need. Yet in your projects you deal with issues that point to inequality, the toughness and cruelties in life. Where does this urge to show the negative side of life come from?

TM : Within my recent works, I took interest especially on the human race’s enormous abilities and activities that change our planet dramatically. One of the most permanent impacts is the wave of extinction of species, caused by man. Now we have wiped off already 30% of all animals that would otherwise live with us. I think it would be mentally ill to neglect this or to be happy about it.
I like to also highlight the things that I find worth it. Catwalk is a work for this purpose, to celebrate the multiplicity of life. I do get lot of joy of my work, especially when it gives me an excuse to spend time with animals or to learn something new.

AD : A lot of our work is made for public space, what interests you in this open space instead of the ‘secure’ life of galleries and museums?

TM : I’m sometimes prone to work in large scale and these works do not always need a sheltering gallery around them. I find it an interesting artistic task to see how my works manage to keep up their identities against the strong visual noise on the street scape, where different signals compete from attention. Also as a young artist, I used to have no access to the museums and galleries, but I didn’t let that stop me from showing my work to the public.

AD : Issues around our ecological environment, our consumption pattern and our social behavior towards others are pressing at the moment. Nevertheless most people are still reluctant to take action and they seem incapable of protecting, at times almost deliberately ignoring the consequences of our actions and indecisions. I think you portrayed this issue very well in your outdoor installation Atlantis – a small house is standing in water, where it is still hosting a stubbornly happy life inside. Through the sounds and lights streaming out of the building, human figures can be seen continuing their everyday activities inside the sinking dwelling, despite its’ apocalyptic condition. How and where do you think did we lose our way into nature? And do you think that we will find our way back? What would be your ‘artistic’ response?

TM : It looks like mankind as a mass is waiting for a mystic outside interference rather than changing any life style patterns. At large, new unknown technological solutions are expected to solve the environmental problems we have created. This is a typical consumerist attitude.

The main problem is of course the size of human population, that has exploded to more than six billions in just a couple of generations and keeps on growing. In case we could create a global movement to reduce human fertility and to cut the population to about 10% or less of today’s density, this would solve the most of the problems of all mankind, flora, fauna and atmosphere.

I think a good artwork speaks in many levels. Visually and content-wise. In the best case, it pulls my interest immediately but also folds open and feeds different arguments and viewpoints to me even long after I saw it. I’m not a typical art activist nor do I belong to any such group. But one of my methods is the use of humour. Not intently but it makes difficult issues so much easier to deal with, humour just happens.

AD : In many of your works you give a critique on over-consumption, make pleas for more environmental awareness and point to the downside of globalisation. In a manifesto you write: “As the winning and the only surviving ideology, capitalism is gaining more consumers around the world, limited only by their economical parameters. This way of practice and thinking has brought the planet Earth towards a situation of an expanding ecological catastrophe. (..) Feeling sorry is the least we can do, but of course it must lead to action in daily life.” Your action was to create the artwork ‘10 Commandments for the 21st Century’, commissioned by Sharjah Biennial in 2007. Another was to go overland to the Biennial instead of flying. Do you feel it made an impact?

TM : I felt surprised that I managed to get to United Arab Emirates and back without flying and I was happy for the interest my artwork received. Most of all, I feel like a little better person for being able to save the atmosphere from some dozen tons of CO2 and other gasses that carrying my weight in the air would have brought to the atmosphere. I experienced a lot on my way to Sharjah, much more than traveling by plane.

AD : The theme of the 2007 Sharjah Biennial was strongly connected to the rapid growth of United Arab Emirates due to the oil business. Theme malls, hotels, apartments, and businesses are being built at such a rapid rate that an estimated 15 to 25 percent of the world’s cranes are in Dubai, one of UAE’s seven emirates. As a contrast, just over thirty years ago, most of the area was an empty desert, so this rapid cultural and economic growth begs the questions: Is the United Arab Emirates building too fast? How is it dealing with issues of sustainability? These questions were the starting point for the Biennial. Being one of the invited artists what was your impression of this expansion and did you see a different mentality than our Western point of view?

TM :  My first impression was disbelief in the UAE tourism expectations, that masses of people would find it interesting to wander in the shopping malls and pay to be closed inside the air- conditioned concrete towers that are rising all over where the coastline was. The globalism of commerce will hopefully make (this kind of) tourism uninteresting, because all the same products are available everywhere.

AD : Catwalk can be viewed as a very positive take on life, all species and objects that parade the catwalk are depicted in the same size, as someone described it “emphasizes the joy of the diversity of creatures and objects following each other. It is a coy and humorous celebration of plurality of our beingness.” (Mika Hannula). The same goes for your project, which I think relates to this World of Plenty, where an ideal world is created where humans co-exist peacefully and lovingly with nature. But the works feel in some way also uncomfortable, because we don’t live in this way, on the contrary even. You yourself ask a very interesting question “How much benefit do humans really bring to the world” – what would be your answer?

TM : I think it is interesting that we credit ourselves as a species that would somehow have overview of timeline of history and capabilities to calculate and work for the better future like no other species. With this attitude, we have managed to create massive problems. It looks like mankind was in its dangerous teenage years – sometimes witty, but mostly living in unrealistic expectations. 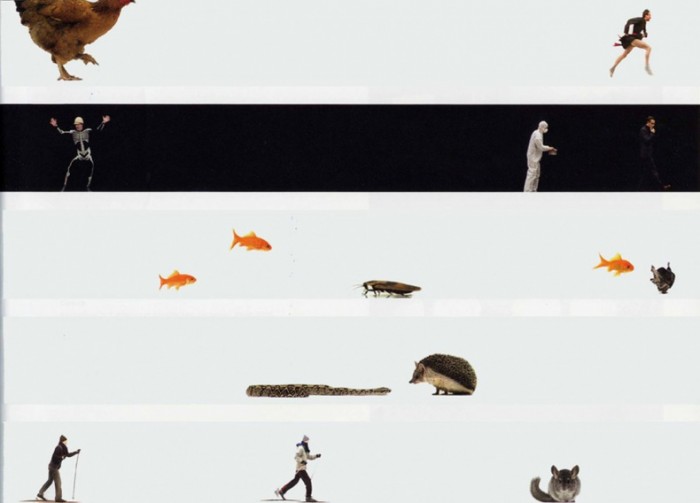