The Stedelijk Museum examines the development of social media and how artists integrate online platforms such as YouTube, Instagram, Tumblr, and Snapchat in their work. Presentations by and discussion with Annet Dekker, Dagan Cohen, Marnix van Boetzelaer and Bruno Zhu.

As more artists are making use of social media and putting their work online in addition to showing it in a physical space, online platforms such as YouTube, Instagram, Tumblr, and Snapchat have become a natural extension of everyday life rather than a separate phenomenon. The Stedelijk Museum brings together artists, curators, and cultural entrepreneurs to discuss the practices that are creating a new art form, not just a passing trend.

Which artists, designers and other cultural producers are successfully using social networks and digital spaces on an ongoing basis? What characteristics of these image-sharing platforms are the most interesting and – above all – why? In the search for answers to these three questions, researcher Annet Dekker (TATE, Piet Zwart Institute), popular media expert Dagan Cohen (Upload Cinema), gallery owner Marnix van Boetzelaer (Boetzelaer|Nispen), and artist Bruno Zhu have been invited to select one work which they see as being an example of the latest developments in the field of social media and the practice of visual art.

This evening is part of the three-part research program Share This! which focuses on online forms of cultural expression outside the museum context. Dagan Cohen (Upload Cinema), who is wary of institutional frameworks, has collected digital work for this program that was developed and exists on the Internet, and enters into a debate with professionals from the art world. Three different institutions with similar interests in digital and online culture are each organizing an evening with Upload Cinema to present and discuss examples from the practice and the phenomenon of online culture from their own perspective. Each institution has its own focus, but as a result of their cooperation the blurring boundaries between high and low culture, and the hybrid character of digital media, will be structurally integrated in the subject for discussion and the debate.

From the perspective of design and e-culture, the first evening (Het Nieuwe Instituut, February 5) focused on the characteristics of online platforms as a presentation space, and the way in which they are used by artists. During the second evening (Stedelijk Museum, March 5) different experts will look at a selection of works and try to determine which social media characteristics are of interest and why. Finally, the issue related to collecting and curating will be tackled during the last evening (Image and Sound, April 9) on the basis of experiences with technical media.

The general public is invited to join the diverse group of scouts and (online) curators cooperating in Share This!. The organizers have set up a Tumblr especially for this project and anyone can add their suggestions. Which social media artists and projects should have a place in the museum? See: http://sharethisart.tumblr.com

MORE ABOUT THE SPEAKERS

Annet Dekker lives and works in Amsterdam. She is an independent curator and researcher specializing in digital art. Currently, she is working as a researcher of Digital Conservation for TATE and Post-doc researcher for the London South Bank University / Photographers Gallery in London. Furthermore, she is a tutor for the Master Media Design and Communication, Networked Media and Lens-Based Media at the Piet Zwart Institute in Rotterdam. Previously, Dekker worked as webcurator at SKOR (Foundation for Art and Public Domain 2010-12). Since 2008 she has been working on a PhD, researching future scenarios for netart at the Centre for Cultural Studies, Goldsmiths University in London.

Dagan Cohen is a creative entrepreneur. Trained as a visual artist at the Rietveld Academy, he has worked for advertising agencies as an art director and creative director. In addition, he is the founder of various autonomous media projects, including Upload Cinema, a film club which screens the best videos on the web. The public submits the films to the website, an editorial team selects the best, and compiles a program for the evening which can be seen in different cinemas and in special locations.

Marnix van Boetzelaer is the director of the Boetzelaer|Nispen gallery in Amsterdam. This new gallery focuses on artists who transcend different media while retaining a strong relationship with these media in their work, such as Jonas Lund and Anouk Kruithof. The gallery also presents projects by artists whose work reveals a particular sensitivity to the hybrid character of media, such as Katja Novitskova and Benedict Drew.

Bruno Zhu is a visual artist and is currently enrolled at the MFA at the Sandberg Institute in Amsterdam. His work, such as the photobook Facsimile II: whodunnit (uploaded on June 27, 2011, abrunozhu.tumblr.com) focuses on the relationship between printed work and photography and the creation of new visual structures. Zhu is interested in the way photographs expose new stories when they are spread across different networks such as Tumblr and Instagram, and how they then continue to relate to the ghostly protagonist of the printed photograph in his book. 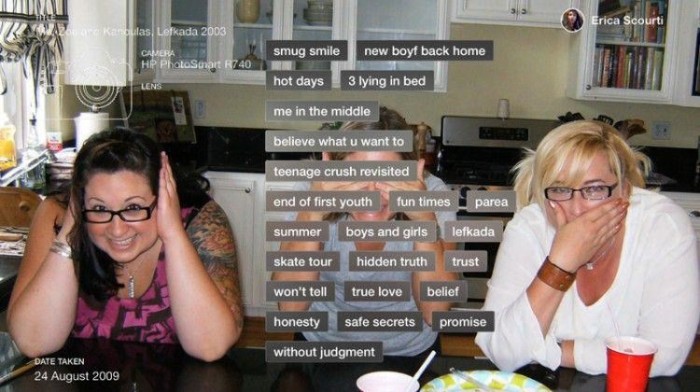