This article is published in Dutch in Metropolis M, no 6, December/January and in English in What’s Next? Kunst nach der Krise. Ein Reader, edited by Johannes M. Hedinger and Torsten Meyer. Berlin: Kulturverlag Kadmos, 2013, pp. 161-3.

Nowadays, Web 2.0 and its social structure is commonplace knowledge. The social aspect of the Web has driven its technological side to the background. Artists are also more concerned with the social dimension of Web 2.0, both as a concept and a way of forming contacts. As artist Aram Bartholl says in an interview: ‘One should consider the various channels of communication, those that are available and at your disposal, and think about what they do with someone.’ Bartholl is well known for his projects and performances in which he brings aspects of the digital world into the physical world. His main argument is that the online world has a great impact on people and the way they perceive their reality. But the shift between the virtual and the physical is often not directly visible, as with works like Speech Bubble (2007), in which volunteers trail people with a large chat text balloon on a stick, or Tweet Bubble Series (2009), featuring Twitter texts that can be attached to a shirt. All of a sudden the overt publicness that we’re so used to on the Internet seems silly and overexposed.

Other artists are taking a less literal stance. These artists, most of them so-called ‘digital natives’, search, cut, paste, mix and mash up the Internet and then reuse it to distribute their work. New works are created on the spot in a continuous stream of comments and versions on commercial platforms like YouTube, or surfing club websites like Nasty Nets and Spirit Surfers. At the same time, a parallel movement has emerged, and many artists have also started to look at offline space to further their experiments, presenting their work in small underground galleries or Internet cafes. Now museums are also showing an interest in the phenomenon of Internet-based art. The New Museum in New York presented Free (2010), an exhibition in which curator Lauren Cornell aimed to show how the Internet has changed our notion of public space. According to Cornell, that communal space has expanded and moved from schools or the streets to other, more distributed forms of collectivity. These new networks are characterized by greater social connectedness and a highly visual, hybrid commons of information.

The Netherlands Media Art Institute (NIMk) is responding with the exhibition The Greater Cloud. Curator Petra Heck invited a number of artists to each co-curate a space with one or more works from other artists. Visitors to the exhibition can also contribute, either in the especially dedicated space or through the online blog that will run during the exhibition.

One of the artists/co-curators is Aleksandra Domanovic, whose work 19:30 (2010) was also part of the Free exhibition in New York. 19:30 is a good example of how artists are using the potential of the distributive quality of the Internet, although that is not always immediately reflected in an art installation. In the exhibition, 19:30 is an audiovisual installation consisting of two screens that show a mix of techno music and music for television news from the former Yugoslavia. The work only becomes truly meaningful when you know the context of its making. Domanovic grew up in Serbia, at the time still part of Yugoslavia. Surprisingly, the strict regime at the time gave a lot of creative freedom to the national television stations, which resulted in high-quality entertainment and information programmes. The evening news was an important landmark that was broadcasted every evening at 19:30. When ethnic tensions rose in the late 1980s, it grew even more important. Watching the news became part of a routine and a shared experience, which contributed to the omnipresent memory of the musical and graphic intros to the news.

In the mid 1990s, it was music, and in particular raves, that also created a shared memory and a sense of belonging to a community for a large group of people. Domanovic conceived the idea of trying to connect these different periods in time by making the music intros for Serbian television available through an online archive. She encouraged DJs to use them in their music tracks.

Domanovic’s archive is still available online and DJs are still spreading new music tracks via the Internet. It is this distributive process that keeps old memories alive, and it can be argued that in these cases memories incite instead of recall. Unfortunately, in the installation at the exhibition, not much of this function of the work can be seen, which makes one start to wonder whether the video installation is the work, or if it is just a documentation of something that happened – and continues to happen – elsewhere? In the latest version of the work, Domanovic has added stacks of paper printed at the sides with fragments of images from raves, which further abstracts the memories and the possibility of their distribution.

Bringing the strategies and experience of the Internet into the ‘domain’ of contemporary art is something that is also of interest to Katja Novitskova, one of the other artists/curators invited by NIMk. And just like Domanovic, Novitskova manages to construct her own vision out of collective enterprises and the image-sharing practice of digital natives. In 2010, Novitskova published the book Post Internet Survival Guide as part of her graduation project at the Sandberg Institute. She guides the reader through the dense jungle of Internet images, interspersing this with the work of like-minded artists. The book offers interesting juxtapositions of images, such as Mark Zuckerberg in a pose similar to that of Julius Caesar, and statements emerge, for example with the placing of a liquefied Google icon next to photos of warfare and floods.

None of the found images is credited or explained. Only the titles of the seven chapters (Seize Upon the Situation, Use All Your Senses, Remember Where You Are, Value Living, Improvise, Vanquish Fear and Panic, Act Like the Natives, Learn Basic Skills) seem to give insight in the direction Novitskova is taking. But just as the images mostly resemble the results of endless surfing, the titles are also retrieved from a random Google search for ‘survival guide’. The guide recalls the practice and aesthetics of the earlier-mentioned surfing club websites. Nicely brought together in a survival guide, the print version shows a clear-cut contemporary cross-sectional view of the complexity of a globalized world. As Novitskova writes, ‘It is a capsule of archaeological insight into our life circa 2010.’

The move from the online practice into the offline space was further explored with the exhibition TruEye surView that Novitskova organised at W139 in Amsterdam last summer. For the exhibition she asked two artists, Anne de Vries and Yngve Holen, to make new work. As Novitskova writes in the catalogue, the ‘exhibition is a next step in approaching a “neo-materialistic” understanding of contemporary art as a domain of heightened density of value flows, and information technologies as an expanding ecology’. This rather dense sentence refers to an interest in the equal distribution of goods by directing attention on the one hand to the effects of living conditions (social influences) and on the other to the societal factors that determine the quality of these conditions.

The artists have interpreted the neo-material approach in their practice by highlighting society’s increasing involvement with technology, which they contrast with its material and symbolic origin. The results range from a set of stairs comprised of recursive sneakers (referencing the mathematical concept of recursion, calling for different modes of thinking and experiencing in time and space) to sliced water boilers that refer to the split halves of a brain, one a container for fluids, the other for ideas. By depriving objects of their functionality and adding a contextual placement, the artists try to open the realm of signification in which various layers of knowledge production are played out against each other.

Digital natives make and present their work in a kind of ‘automatic Internet state of mind’. This is often referred to as the ‘post-Internet era’. This term was first used in 2008 by the artist/curator Marisa Olson and is now primarily associated with an increasing interest in the specific materiality of objects and images, including all sorts of ways of presenting and distributing them. What’s new about the way these digital natives work is not so much the fact that they base themselves on social, economic and political theatres, but above all their method of obtaining material, of changing and spreading it. Which immediately raises the question of whether these works, considering their complex nature and existence in a distributed and fragmented space like the Internet, can even be exhibited at all. There is no quick answer to that. But it is certain that a great deal is lost when these works are shown in an exhibition, especially the energy, the surprise effect, the fragility of the illusion and the transience of the moment.

Making processes that are related to the Internet material could be seen as a means of grasping our complex and continually changing world and showing its fragility and ephemerality. It could be said that, in giving a material form to the (arguable) immateriality of the Internet, artists are trying to transform this ephemeral and intangible channel in a poetic time freeze. Which immediately raises another question: By bringing their work into the gallery as sculptures, paintings or videos, are artists not just out for commercial success? Or are we seeing a deliberate inversion of the process of dematerialization, typified by Lucy Lippard forty years ago as an anti-commercial strategy? 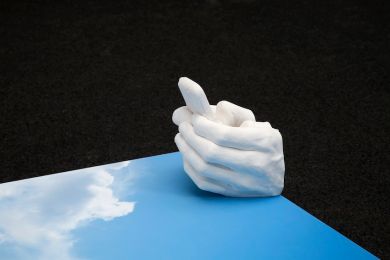