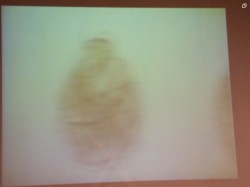 The Netherlands Media Art Institute is organising the exhibition Optical Illusion for this fall. Optical illusions have fascinated man as far back as the Middle Ages, and continue to do so. For some time now film has been the magical medium par excellence. Recent releases such as ‘Harry Potter and the Philosopher’s Stone’ or ‘Chamber of Secrets’ and the ‘Lord of the Rings’ cycle actualise this power of cinematographic imagination. But since the rise of video film no longer has the sole claim to this magic, and with virtual reality and the computer the possibilities seem unlimited.

In Optical Illusion various Dutch and international artists reveal the magic in media art. By playing with space, light and shadow, extreme close-ups or computer techniques the art magique is brought to life. Each work poses the question, am I really seeing what I’m seeing? 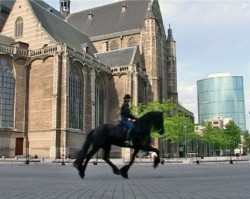 Michiel van Bakel is exhibiting his latest work, 5AM. In a dynamic manner he shows the illusion of a running horse that changes into a motionless statue floating in the air. This mysterious stasis is just as quickly broken when the viewer sees the horse and its rider trot away again. 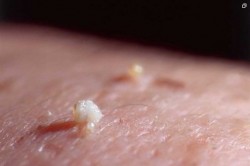 The subject of Sybille II by Wim Delvoye is the skin. The magic of the work lies in the use of extreme close-ups. They cause the pictures to at first look like an imaginary, lifeless landscape. After several minutes worm-like objects on the surface come to life. Suddenly the true nature of the images is revealed. 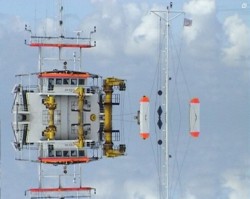 Starship (2002) by Bernard Gigounon is a spectacle of scudding spaceships. One by one the spacecraft glide past and turn, sometimes after a short pause. Dramatic, surging music, composed by the artist, accompanies what we see. The images in Starship form an impressive entity, in no way inferior to science fiction films like Star Wars. However, as you watch longer, it appears that the airships did not originate in the imagination of the artist.

In Returning to Fuji Nan Hoover turns again to Mount Fuji in Japan, where this mountain is the spiritual symbol of the coexistence of man and nature. The only image that the viewer sees is a mountain; the sound is the wind. Through changes in the weather or small variations in the direction the camera is looking, the mountain appears to be undergoing a continual metamorphosis. The setup that Nan Hoover used for this work has been recreated so that the visitors can themselves experiment with light and the camera.

With the particular placement of a camera, monitor and projector in the closed-circuit installation Confession and Demand by Kazumi Kanemaki, time, place and movement run through one another. This creates a tension between reality and illusion from which the viewer cannot escape. The sound reinforces the optical illusion when visitors disappear into the ‘twilight zone’. 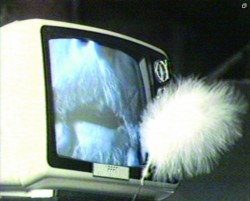 The installation Pfft… is an example of SERVAAS’s first experiments with video in combination with electronic techniques. On a high pedestal stands an old-fashioned television set. A small, white, fluffy feather has been mounted in the middle, in front of the screen. The image shows a blowing mouth with clearly audible breath, which passes through the glass of the screen to make the feather move. Although this installation is already several years old, the magic effects of the medium have lost none of their power.

Eric Steensma will be producing a site-specific installation for the exhibition. He sets photographic images in motion and liberates them from the medium that carried them, so that they become a part of the environment. This creates a third dimension. The images are literally projected into the existing world, so that reality itself is called into doubt: what is really real, and what am I really seeing? Because of the absence of a clearly visible narrative with a beginning or end, the viewer continues to look with fascination at the created mini-reality in the real environment, each time asking again what is actually happening. 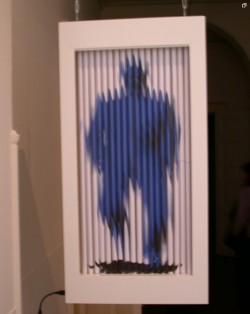 In his installation The Blue Man, Jan Peter van der Wenden shows how a moving image, a permanent loop, can be created without the use of video or film. He creates his movement by assembled pieces of animation material that he affixes to round tubes that are then rotated. The only thing from which the blue man takes his personality are the colour and his walk.

Magic is very popular among the young. The success of books and films like the Harry Potter and Lord of the Rings series, but also television series like ‘Buffy the Vampire Slayer’ and ‘Charmed’ are proof of that. The Netherlands Institute for Media Art and the Kunstweb Foundation have therefore developed a special programme for secondary schools for this exhibition .

Young people will not only become acquainted with the ‘artistic values’ of media art, but also get insight into the manipulative effects of media techniques. In a short workshop they will then themselves be able to work with optical illusions, in which the creation of the illusion of movement will be central.