Nancy Proctor: The Spectator in a Discriminating Role | On the Mobile Museum

"A traditional audio tour, even a linear one, that immerses you in stories and great content can be a wonderful thing. But in the majority of cases that I have seen, even recently, that paradigm seems to be the limit of thinking. Examples that go beyond that are using the mobile as a platform to enable people to be both curators and artists. To really engage in a very direct way, not just with the collection but also with the whole notion of what the museum is, and the work of the museum that is normally not available to visitors."

Only by making themselves much more dependent on their public can art museums continue to exist. In the third and last part of a series on the future of the museum, METROPOLIS M offers an interview with Nancy Proctor, specialist in the area of mobile and digital strategies for the museum.

Annet Dekker: What are your observations on the use of mobile technologies in museums?

Nancy Proctor: I believe much of what happens has not really gone terribly far outside the traditional audio tour model. That is not necessarily a criticism; I think traditional audio tours are really good, and when well designed they can exponentially improve the experience of a site. A traditional audio tour, even a linear one, that immerses you in stories and great content can be a wonderful thing. But in the majority of cases that I have seen, even recently, that paradigm seems to be the limit of thinking. Examples that go beyond that are using the mobile as a platform to enable people to be both curators and artists. To really engage in a very direct way, not just with the collection but also with the whole notion of what the museum is, and the work of the museum that is normally not available to visitors.

I’m especially excited about what art museums are doing in this regard. Perhaps precisely because, so far, we have seemed to be so limited in the range of experiences that we provide inside our museums. Nina Simon [author of The Participatory Museum and the blog Museum 2.0 – ed.] made this comment to me once after we visited the Smithsonian American Art Museum together: “You know when you go into a science museum, a lot of the experiences are aimed at sort of empowering the visitors to do scientific work, to be a researcher or to be a scientist as some part of their visit.” You don’t really find many art museums creating experiences in which the visitors can be an artist or a curator. Art museums tend to construct a more passive relationship with the visitor.

AD : What in your view constitutes participation? And why do you think participation is important for museums?

NP : I think of participation in very conversational terms. I am extremely interested in the learning impact of conversation. The thing about conversation between two people, even if they are experts, is that if a third party is listening, that dialogue actually opens up in a triangle and it creates a space for the third party to interject opinions and thoughts, even if they are listening to a Podcast. Such a triangle model provides space for learning. Taking this a step further, I think learning is often only established when re-communicated. Much research on this topic has shown that you can do all the informing you want, but until the moment you re-argue the information in some way, learning has not happened. A museum could benefit from this by turning the museum visitor into a sort of teacher or ambassador, letting them retell to others what they have heard and experienced.

AD : You propose several different roles for museum visitors, from engagement with the collection to the notion of the museum as a whole, and teaching about the museum. What influence does this have on the traditional notion and role of the museum?

NP : One of the things that I have argued for is the museum as a distributed network. It is not just the technology that is making this possible, but the cultural shift that goes hand in hand with the introduction of social media. Traditionally, the museum communicates one-directionally: with its experts and its expertise, its content and information that it disseminates, the museum radiates outwards. The museum moves from the centre to the audience that is clustered around it. But now we are seeing that the museum is starting to exist on many different platforms, including those that the museum cannot control. For example, you can go onto Flickr and find photos of any museum in the world, whether or not they allow photography. You can find them on Wikipedia, on YouTube, you might even find Podcast tours of the museum that were not created by the museum. This trend is what I call ‘the museum as a distributed network’. In this paradigm, the museum has no centre anymore, and as such resembles a rhizome, something that looks a lot more like the Internet.

AD : This is an interesting comparison; could you elaborate on it a bit more? What are the key benefits for the museum?

NP : First I think it makes the museum more sustainable. One of the powerful things of the structure of the Internet is that is impossible to eradicate the entire Internet by a direct hit on a centre, because there is no centre – which is of course one of the strategic things about it, being designed from a military point of view. Similarly, when we think about the museum’s mission, one core element is that it has to do what it does forever. It has to keep its collection, preserve its collection, it has to interpret its collection, to make it relevant to the public and as accessible as possible to a broader public, and it has to do all that ‘forever’. Sustainability is an absolute core requirement for the museum’s activities. It looks to me that distributed networks are incredibly sustainable structures. Because if we get a broad enough public interested in the museum and its collections, its activities, and its basic mission and message on a broad enough range of platforms, whether a museum controls them or not, then whatever the museums happens to be doing back in its core, the conversation is continuing and is self-sustaining to a very large extent.

Secondly, and this relates to another core activity of a museum, is the issue of quality. For me, quality is to a very large extent in the eye of the beholder, and it relates to relevance. What’s quality for one member of the public may not be of interest to another one. As well, what is relevant and what is important will change with every generation and every moment in time. Therefore, the question of quality should be an ongoing debate. This is where the expertise of a museum comes in, to help us sift through a lot of the noise. The museum as a distributed network can improve the quality of information and collections. It is easy to feel like the notion of quality is somehow retrograded, outvoted or even dangerous or oppressive when dealing with social media and the concept of citizen curators and citizen scientists. But I believe we should look at it from a different perspective. Social media can be an extremely powerful tool in helping the quality of the collections and the quality of information that museums themselves can make available about their collections. It is ‘Joy’s Law’ that says, ‘No matter who you are, the smartest people work for someone else.’ And Wired’s editor-in-chief Chris Anderson added, ‘And you won’t find them.’[1] Thus it becomes important that you find a way to attract them to you. The Powerhouse Museum in Sydney, among others, has done a great job of putting online their entire collection, their collection management records, and everything they found that could potentially be of interest to people. And it worked; citizen curators and citizen scientists who know a lot about the objects in the collection have come forward and helped them add to that information about the collection and improve it hugely.

We will never have the time and the budget to write it all ourselves, so why not leverage the great content of third parties, including that of citizen curators and citizen scientists who know more about something than we do? The museum can play a really important role as a trusted authority or source, just by pointing towards great content about the collection that is essentially published by third parties.

AD : How will this impact the job description of people working in the museum?

NP : I strongly believe that expertise is formed through conversations. Any scholar or expert who is being honest will have to admit that what they know is a result of conversation that they had with other knowledgeable people. What we are probably looking at is simply underscoring the conversation part of that skill set and extending the definition of relevant expert people beyond the curators, for example, and starting to recognize that expertise can come from a number of different perspectives and paradigms. The expertise of the curator will henceforth be judged not just on what they know and what they themselves have done and published but also on the extent and quality of the network.

AD : What should the museum of the (near) future be aware of? How will museums with limited capacities be able to deal with the mobile museum or distributed network?

NP : It is important not to get hung up on technology and not to think of participation, learning, and the distributed network models as things that are entirely dependent on technology. You can do great interactive experiences with post-it notes! I think where we are going and where we should be going is in the direction of the museum as a distributed network model, and as I said, this will for a large part sustain itself. But this is not to say that the traditional model will vanish; they both co-exist and probably always will, because there will be moments and contacts in which the museum will be functioning, at least to some audiences, as the disseminator of knowledge. So that will not go away, but we’re able today to add other models, like the distributed model, to diversify the nodes of the project.

Such diversification is very much needed, especially if we want to think about preserving our culture’s most important memories and artefacts forever. We need to take joint ownership of that. The thing that makes museums essential is that they are the repository of culture and creativity. They are absolutely essential to our past and our future. But unless we all take ownership, we are not going to benefit from it as much; indeed, we risk losing it. Every time I hear that museums need to act more as businesses in order to be sustainable, I think there couldn’t be a worse thing said. Your average business only lasts thirteen years. There are very few businesses in the world that are as old and successful as the Smithsonian Institute or the British Museum or the Louvre and the Vatican Museum. For that, we need public funding; we cannot rely on capitalism to sustain us. Moreover, we need the public.

The concept of ‘Joy’s Law’ originates from Bill Joy, cofounder of Sun Microsystems. A reaction can be found in the article ‘In the Next Industrial Revolution, Atoms Are the New Bits’ by Chris Anderson in Wired, February 2010. See: www.wired.com/magazine/2010/01/ff_newrevolution/all/1 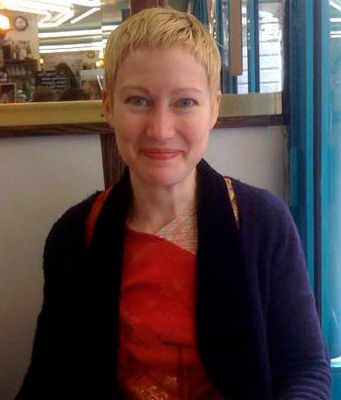