In the exhibition ‘My Story’ stories visualized, the Netherlands Media Art Institute shows the various ways in which artists visualize a story: multiple screens, spatial montage and interactive approaches. Some artists make use of multiple solutions. In personal, insistent and fanciful ways the artists tell stories about people and their lives, posing questions about the definitions of reality.

Emmanuelle Antille
The Red Cabins (part of Angels Camp, 2003)
In The Red Cabins the characters do not feel at home in this world. They therefore decide to begin a new life in which they will determine their own norms and values. Emmanuelle Antille alternates apparently insignificant images with extremely suggestive images and scenes. The work is characterized by ‘tainted innocence’. As a viewer you try to get a grip on the created world, but just as in her earlier work the characters themselves give little away. 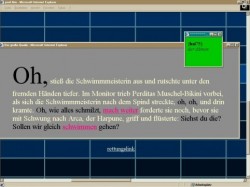 Susanne Berkenheger
Die Schwimmeisterin (UK version, 2004)
Susanne Berkenheger terms her work Internet literature. Die Schwimmeisterin is based on text and graphic references. After a number of mouse clicks a virus, ‘shark75′, is activated. The virus tries to slowly but surely tempt the visitor to certain choices that lead to the death of the central character. More than a traditional book allows, the visitor/reader becomes an accomplice in the course of the story by taking a stand and making specific choices. At the end of the story the route followed becomes visible, and the reader is once again confronted with the events.

Persijn Broersen & Margit Lukács
Crossing the Rainbow Bridge (2003)
The installation Crossing the Rainbow by Persijn Broersen & Margit Lukács is shown with the aid of two projections and is about the lives of two young people. They tell – sometimes in a cloyingly sweet way – about each other and the relation in which they find themselves. The stories tell of dreams and fantasies as cherished by lovers. The split screen allows the scenes to sometimes supplement one another, while at other times the two stories are played against each other. Now and then the camera takes over the narrative in order to visualize the story in some associative manner.

Olia Lialina
My Boyfriend Came Back From the War (1996)
A conversation between two persons slowly comes into being as the user clicks the computer mouse in My Boyfriend Came Back from the War. The mental world of the two people who were separated from one another and now try to come back together is slowly unraveled. Lialina uses the possibilities of hypertext to tell multiple stories simultaneously within one screen. Various frames can be opened, providing parallel and associative narratives.

Laterally Yours (2002)
In this work Shahryar Nashat shows how fantasy gets a place in imprisonment, how it leads to alienation, and in what manner anxiety takes shape. In the multichannel installation image and sound come at the viewer from different sides. The setup allows the story and the facts in the video to confirm or contradict each other.

Jogchem Niemandsverdriet
NobodyHere (1998-present)
In NobodyHere Jogchem Niemandsverdriet lives on the Internet. His identity is shaped by the small stories that he tells and visualizes, through which the viewer can click. The one-to-one interaction and the personal stories make Jogchem a personal, virtual friend, someone with whom the visitor to the site can enter into a relationship. Now and then Jogchem asks for advice, to which the viewer can respond by e-mail. The adventures and stories that are created subsequently become linked with one another at multiple points. 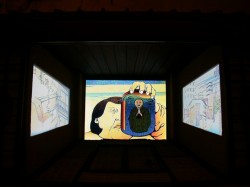 Tabaimo
Little Japanese Kitchen (2003) and drawings (2004)
Tabaimo investigates social and cultural tensions in Japan. She visualizes the traditions, gender differences, family relations and cultural etiquette. The everyday worries of a housewife are revealed in Little Japanese Kitchen. Tabaimo’s fragmented way of working can best be seen in the handmade drawings that are drawn across different pieces of paper. Tabaimo shows us the apparently unusual banality raw and unvarnished. The subtle and detailed animations are recognizable and disorienting at the same time. She presents her story without commentary, but with a razorsharp realism.

‘And Angels Camp is our cry / The place where we buried our dreams / Our soiled virginity / And all the lost things we’ll never again see. ‘
Angels Camp, 2003 – Emmanuelle Antille

‘She looked so amazingly sweet, a bit like Snow White’
‘He ordens the world as if it is an efficient statistic’
Crossing the Rainbow Bridge, 2003 – Persijn Broersen & Margit Lukacs

‘My boyfriend came back from the war. After dinner they left us alone.’
1997, Olia Lialina

David A. Cook, A History of Narrative Film (Emory University, 2004)

Jim Bizzocchi and Justine Bizzocchi
Birth of a Nation: A Filmmaker’s Perspective on the Development of Interactive Narrative

Thanks to:
Prins Bernhard Cultuurfonds 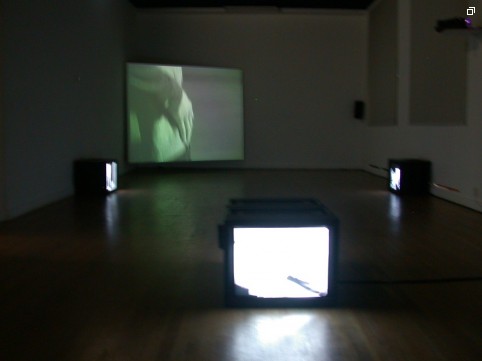