Narratives permeate every aspect of our cultural life. History, politics, memories, entertainment, communication and our sense of identity are rendered in a narrative form. We shape ourselves and life in the world around us on the basis of stories – ‘true stories through which, in the manner of certain Aboriginal legends, the world is dreamed into existence’. The telling of stories appears to be as old as language itself, and moreover appears to be a universal phenomenon.

There was a time when stories were shared orally in order to visualize the world around us. Presently a large proportion of our stories come into being through the medium of film and television. The moving image has become the accepted literature of our time, and is even perhaps the foremost characteristic of our cultural landscape.

Traditionally film and video permitted a story to be seen within one screen. Non-linear narrative structures were made possible by means of montage, but it was a number of years before spatial montage began to play a role. From that point, various stories could be told within one screen or be divided over a multiple screen setup. The first investigations into multiple screen projections took place in the 1960s. In these, artists wanting to disassociate themselves from the conventional aspects of painting and the technical restrictions of film and video equipment seized on the tradition of the diptych and triptych in painting. Their experiments were shown as installations, as ‘live experience art’ or as performance. Very rapidly people also became interested in visualizing new narrative structures with the aid of these multiple screen projections. Here traditional plot structure was abandoned. Because of the then high cost of apparatus, this often remained limited only to experiments. Today the spatial story in which various images are to be seen at the same time is very much a current topic again. Particularly in mass media such as film, advertising and television programs – from CNN bulletins to nature documentaries and detective stories – one finds spatial visualization of stories everywhere.

The rise of the computer allowed further exploration of narrative expression. Although the multiform narrative was not new, the computer made it possible to combine multiple texts, images and sound within one or more screens in real time. This allowed the creation of simultaneous multiple story lines. The computer also made it possible for the users themselves to determine the story in their own way. The open structure of the computer – and the internet – stimulated active involvement by users. Not only could they now make their own choices, but they were asked to make personal contributions. With this concepts of narrativity and authorship appeared to definitively change in their relationship to one another.

But the interactive story is more than just that. It is at this moment the most ambitious art form, because traditional narrative structures connect with visual art, interactivity and sound. Each of these components has specific characteristics with which information can be understood from various perspectives. This affords a new way of looking at the story, which now can be interpreted from various perspectives. 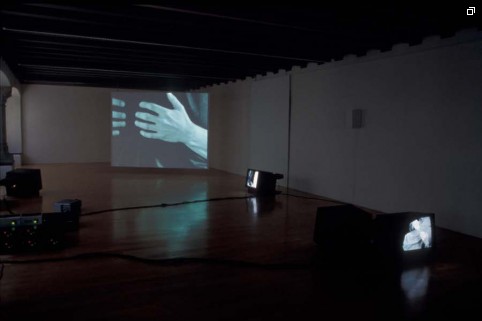