From November 5 through December 4, the Netherlands Media Art Institute presents a survey exhibition of the video and installation works of the Dutch photographer Erwin Olaf. In his work Olaf evokes a disorienting, theatrical world in which, with a touch of humor, he visualizes themes such as ideals of beauty, the spectrum between male and female, but also Western democracy and its freedoms. 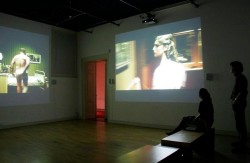 Among other work, Moving Targets will be presenting the Dutch premiere of the film/video work Rouge (2005) and Rain (2004), and the world premiere of a pair of film/video works Annoyed and Wet. In addition a liberal selection from his autonomous film and video work from the past will be shown, including Separation (2003), Spanking Clowns (2000) and Tadzio (co-directed with Frans Franciscus, 1991).

Erwin Olaf has been active for years now both in and outside the museum circuit in the field of photography, film and video. He has acquired international fame for his controversial photography. In recent years he has increasingly occupied himself with autonomous video and installation work. According to Olaf, the use of the moving image and sound had made his work more adult, and he sees it as a complementary activity which adds depth to his photo work.
Olaf is interested in and intrigued by video art because, according to him, it gives room for extra emotion. You can draw people deeper into your world than you can with photography. By means of motion and sound, you can emphasize the reality still more.

Erwin has been making film and video work since 1987. Vanity Five was the first in a series of more than thirty works to date. Among them are a number of exceptional productions. In recent years he has devoted himself more and more to making autonomous film work, such as Separation, Rain and Rouge. At the moment there are ongoing preparations for a children’s science fiction film, Tom’s Space (Bos Bros.) and a teleplay in cooperation with Arjan Ederveen (Toko).

The opening of the exhibition Moving Targets coincides with the Museum Night. Special activities will take place in connection with this, to be announced in due course.