The solo exhibition by Christiaan Bastiaans at the Netherlands Media Art Institute, Montevideo/Time Based Arts is the second presentation of Hurt Models, a project to which the artist has devoted himself since 1998. Bastiaans will exhibit video, photography, drawings, and sculptures.

Many of Bastiaans’ projects are the outcome of a protracted process of interdisciplinary research and personal experiences. The themes which the artist explores literally go beyond borders and boundaries. The countries which he has visited in the course of his artistic investigations range from Japan to Irian Jaya, and from India to Sierra Leone. These travels result in projects in a variety of media in which multiple layers of meaning nestle: displacement and alienation, the movement of human beings – either individuals or groups, or sometimes even a part of a person – to an environment or a situation which does not belong to their familiar habitat; transmutation and transvestitism as a change of identity; the vulnerability of the individual, but also the fighting spirit of human beings and their will to survive. 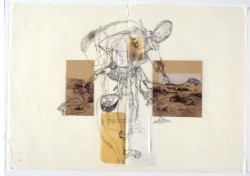 On November 2nd the Museum night will take place in Amsterdam. In the Netherlands Media Art Institute special tours will be given to the public through the exhibition Hurt Models by the artist and personnel of the Institute. Also the installation Narcissus Narcosis from Michiel van Bakel will be shown. From 7:00 p.m. – 2:00 a.m.

Thanks to:
With thanks to: Amsterdam Fonds voor de Kunst, Beamsystems, NCDO