AiR: Govcom.org, A Thousand Dinners A Night: Amongst the Issue Celebrities

Artist in residence from January – February 2007

The research network group Govcom.org worked at the Netherlands Media Art Institute as temporary artists in residence. During their days at the institute they investigated fluctuating alliances between political issues and celebrity endorsements.

In the history of advertising, celebrity product endorsement first became prevalent in the U.S. in the 1920s and 1930s. For example, Amelia Earhart, the first woman to fly solo across the Atlantic Ocean in 1932 returned to the United States and endorsed wrinkle-free clothing for Macy’s department store. Most recently, Angelina Jolie has become a face for another U.N. agency, UNHCR; she first became interested in human rights (and the landmines issue) whilst filming Tomb Raider in Cambodia. U.N. Goodwill ambassadorship may be considered the ultimate recognition of the endorsement of an issue by a celebrity. There is a U.N. goodwill ambassador hierarchy: international, regional and national goodwill ambassadors. The United Nations Association of the U.S. named the former Beatle, Paul McCartney, and his wife, Heather Mills, Goodwill Ambassadors for Adopt-a-Minefield, the charity dedicated to landmine clearance and survivorship. Together they help to start up Adopt-a-Minefield, raising millions of dollars, largely through gala dinners, including N1KD, the Night of A Thousand Dinners, hosted amongst others by Michael Douglas and Colin Powell.

The video A Thousand Dinners A Night: Amongst the Issue Celebrities by Govcom.org is the final result of their residency at NIMk. It chronicles the entanglement of social issues and celebrity couples. It takes seriously the otherwise cynical idea of celebrities entering and leaving social issues, depending on the distractions of publicity. The installation was part of the exhibition Faith in Exposure at the Netherlands Media Art Institute, curated by David Garcia from February 24 – March 17, 2007.

Govcom.org is an Amsterdam-based foundation dedicated to creating and hosting political tools on the Web. Much of the work involves mapping issue networks on the Web. Govcom.org is represented in the residence program by Marieke van Dijk, Noortje Marres, Erik Borra, Michael Stevenson, Laura van der Vlies and Richard Rogers. 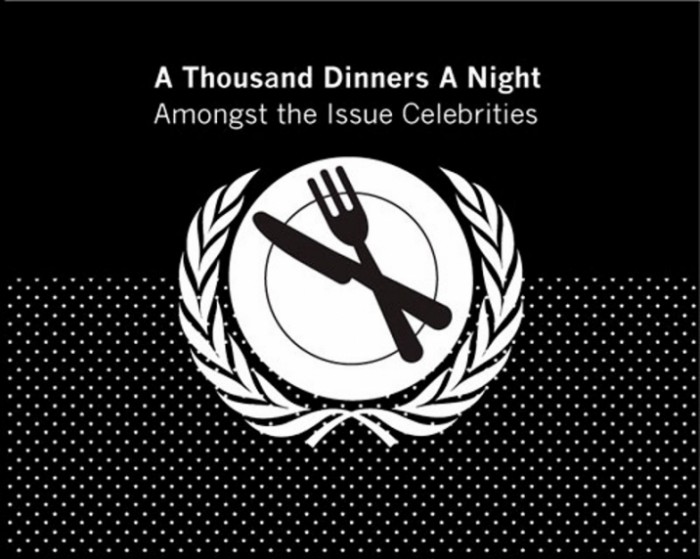