This is So Contemporary

This exhibition catalogue is part of Monoskop Exhibition Library @ Seoul Mediacity Biennial 2018. Thanks to Dušan Barok for the invitation to join a curatorial challenge. A digital version of the 101 page catalogue is available on request.

The key functions of a museum are collecting, preserving and presenting, and informing the public about culture and art. Performance art has been notoriously difficult for museums to handle. Despite the ‘easy’ presentation, the non-materiality of the artform challenges a museum’s conventional methods and practices. Artist Tino Sehgal added to these problems by insisting that his performances, or better his ‘constructed situations’, absolutely cannot be documented in any way or form. While several books and some catalogues have been written about his work, none of them include images of actual performances.

Resisting documentation has a long history in performance art. For example, performance artist Peggy Phelan is much cited for her critique on documenting live performances. While Phelan emphasizes that one should never document live performances, as it defies the essence of the artform and is also a poor substitute for the real event, Sehgal’s resistance to documentation is focused on the institutional. As a political and social comment on the museum, Sehgal decided not to play by the rules of the museum game and instead proposed his own rule set. However, instead of breaking with the system completely by rejecting the institutional altogether, which would be affirmative and not necessarily very interesting, Sehgal manages to turn the tables and tries to slowly change conventions from within. Some of the traditional museum’s infrastructures, such as fixed opening hours and selling his works in editions, are followed. In doing this, his constructed situations function similarly to other material objects, except for the ban on any form of (official) documentation.[1] This also means that there are no written instructions that can be executed or any other props or documents that can be (re)sold, as was the case with many earlier performance artists or conceptual artworks.

For each performance Sehgal sets up the initial parameters and subsequent steps unfold in collaboration with the other players: the space, the light, the guards, the visitors, and in some cases the weather. As he observes, “there is a heightened framing of the social exchange but in the act it can be messy”.[1] At the same time, similar to Phelan and other live performance artists/choreographers like her, Sehgal is wary about people’s impulse to mimic visual documentation without comprehending the principles of a performance. While documentation for the purpose of re-performance or re-interpretation may well hinder the initial intentions of the maker, documentation can also become part of the act.

Now that documentation has become ubiquitous and circulates through multiple layers of hardware, software and code into different cultural and social corners, its function has changed and it can transform into something other than merely a representation of a specific moment. As soon as a photograph is uploaded online it endures in the flows of users’ online feeds – propelled by its metadata and various algorithms the image multiplies across all kinds of users, times and contexts. In this sense the performance and its documentation start to overlap as the documentation generates new kinds of movement and turns into a process of re-performance rather than a representation of a past event. As artist Amelia Ulman says of her performance on Instagram and Facebook “when the audience look at the image and react […] that is the moment when the performance really happens” (Wood 2017, 76-7). Seeing documentation as capturing an event fails to recognize the transformative potential of documentation as event. In other words, being informed and regulated by invisible systems and algorithms, from its creation to its dispersal, documentation is not merely a means to mediate something but becomes co-constitutive of the event. Enduring liveness begins once a button is pressed despite the watchful eye of a guard.

While I sympathize with Sehgal’s aims and ideas, I’m also intrigued by the numerous ways in which documentation has developed and expanded over the last two decades with more and more photos and videos appearing online. In this catalogue three perspectives are presented that open up the potential of documentation as a method to generate new articulations and ways of understanding, thinking and performing. Countering the “no photos allowed” from the museums’ press releases, with the documentation used by online news outlets and that created by visitors, the experience of being present at the performance can no longer be considered as a fixed or even final perspective. Instead the constructed situations continue to act through viewing, capturing and circulation. Navigating the various documents that are created idiosyncratically according to access (having a camera and an Internet connection) or choice (being willing or courageous enough to take a photo and challenge the rules), the Imaginary Retrospective of Tino Sehgal adds to what theatre and performance scholar Sarah Bay-Cheng beautifully describes as “a multivalent experience that is shaped and constructed by the individual experiences, choices, and negotiations of all parties within a connected network of information, sensations, and varying access points” (2012, 36). At the same time, it might open up a desire for new performance to emerge.

text and selection by Annet Dekker 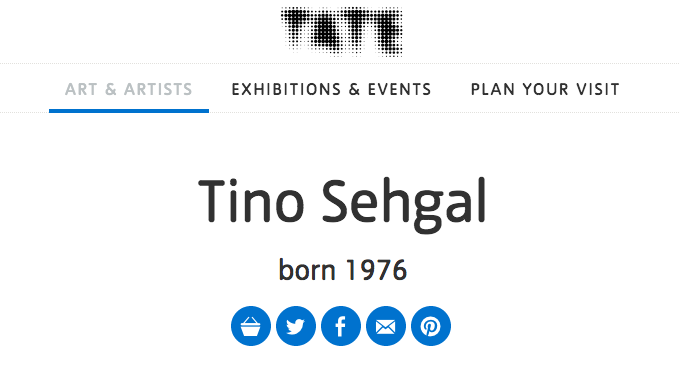