This coming July 19 the Echigo-Tsumari Art Triennial 2003 opens in Japan with the performance REAL LEAR by Christiaan Bastiaans and the light sculptures The Echigo-Tsumari Mountains by Nan Hoover. Both projects take place in the open-air theatre of the new Snow-land Agrarian Culture Center in the town of Matsudai, a center specially designed by the architectural bureau MVRDV.

Christiaan Bastiaans and Nan Hoover each give shape to Shakespeare’s drama King Lear in their own manner. In King Lear Shakespeare analyses a number of issues, including human nature and the influence of nature on man and life.

Since March, 2003, Bastiaans has been staying in Japan to work on the performance with local people from 75 to 90 years of age. The older people come from the isolated mountain landscape that surrounds the small town of Matsudai in northwest Japan. For the performance Bastiaans is focusing on the attitude of these older people with respect to radical economic, social and political changes in this strongly aging section of Japan. 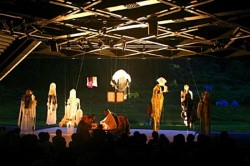 Bastiaans has designed special sculptures, which he terms ‘spirits’, which are connected with the various characters in King Lear, and are coupled with the individual performers. The performers will mix their own texts with original text fragments from Shakespeare. For Bastiaans REAL LEAR is also a continuation of his project ‘Hurt Models’, on which he has been working since the mid-1990s.

The fragility which is expressed in the performance is also reflected in the Echigo-Tsumari Mountains light sculptures by Hoover. The forms are covered with photographic images from the mountains of the area and the top is cut to the form of these mountain tops. The varying use of light in the sculptures reflects the mental state of Shakespeare’s King Lear. 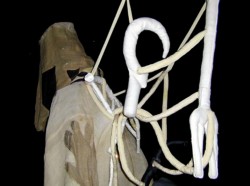 Through small openings on the bottom, the light skims over the ground and shoots up on all sides, reflecting the ongoing madness King Lear is enduring in his mind. Sometimes moments of clearness other times total vagueness or disorder. On their way to the performance the audience will walk through the light. They will follow the streaks of light in search of clarity or direction, thereby themselves creating new shadows and patterns. The top of the sculptures is left open, through which the light slowly climbs upward. This visualizes the inner state that ultimately – even as in the performance – rises upward.

The Echigo-Tsumari Art Triennial is a tri-annual event organized by Fram Kitagawa (director of the Artfront Gallery, Tokyo), and runs from July 19 through September 7, 2003.
‘The Echigo-Tsumari Art Triennial is a natural-setting festival for nature, art and human beings.’ More information over the more than 100 participating artists can be found at:
http://www.echigo-tsumari.jp/ 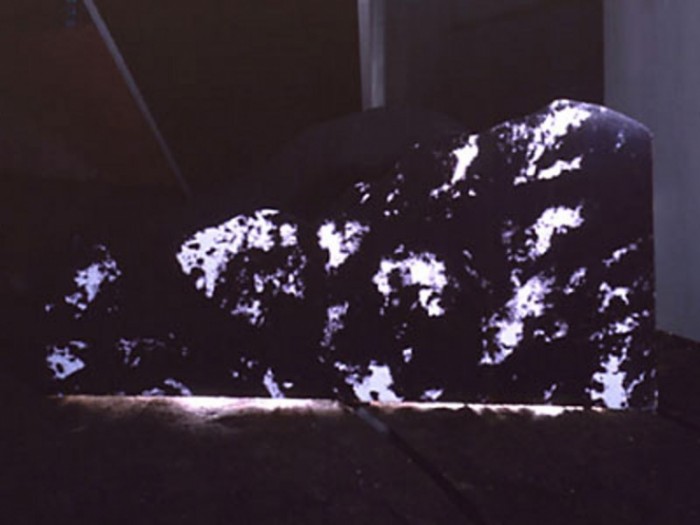