In light of the internet-based art (net art) documentation project initiated by artist Constant Dullaart and art theorist Robert Sakrowski, the Culture Vortex research program organized a pre-pilot and two pilot sessions in a controlled environment to test their proposed subjective method of documenting net art. In line with the aim of Culture Vortex to encourage public participation in online cultural collections, this project seeks to answer how interaction with an (online) collection can be documented, and what (future) purpose this documentation can have.

In light of the internet-based art (net art) documentation project initiated by artist Constant Dullaart and art theorist Robert Sakrowski, the Culture Vortex research program organized a pre-pilot and two pilot sessions in a controlled environment to test their proposed subjective method of documenting net art. In line with the aim of Culture Vortex to encourage public participation in online cultural collections, this project seeks to answer how interaction with an (online) collection can be documented, and what (future) purpose this documentation can have. Dullaart and Sakrowski understand net art as a work that is meant to be shown on a personal computer, making use of its connection to the World Wide Web.

Dullaart and Sakrowski have developed a method to document net art that aims to move beyond the technical specifications and the interaction model of the artwork. They try to capture the reception of net art in an environment in which it was originally perceived. As Sakrowski explains, “the context, the private atmosphere, and the hardware interaction defines a large part of the ‘net art activity.’” The documentation should thus represent four different layers:

To reflect these different layers they developed a template for video documentation in which the work of art is presented as a split-screen: on one side is a screengrab displaying the artwork while a user navigates it, and on the other, an over-the-shoulder shot showing the user in their (personal) environment interacting with the artwork.

Because this method emphasizes the “reception situation,” a situation that should be as “natural” as possible, it is important for users to be able to create the documentation of the artworks themselves, in their own surroundings. The template should thus be easily executable to allow for this kind of participation. This does not only regard to the documentation process itself, but also the database, storage and providing the right meta descriptions. Dullaart and Sakrowski choose to use YouTube for this purpose: it is publicly accessible and easy-to-use, provides a cheap way of storing data, and by including a metadata form it is possible to create a database within YouTube.

The goal of this project is to find out how best to carry out this method and to gain insights into the obstacles of documenting net art in this manner. The information revealed through this research can be used to develop Dullaart and Sakrowski’s proposed template further and make it more accessible for users, it can be used to reflect critically on their proposed method, and to make recommendations for artists and institutions who would like to use this method in their documentation of net art. For more information about the Dullaart-Sakrowski method you can read an interview with them by Annet Dekker at net.artdatabase.org/about/.

Annet Dekker Head of Research. Independent curator and researcher with subjects of interest including the influence of new media, science and popular culture on art and vice versa. Her PhD is on strategies for documenting net art at the Centre for Cultural Studies, Goldsmiths, University of London, under the supervision of Matthew Fuller (since 2008). http://aaaan.net/
Constant Dullaart Artist and Creator of net.artdatabase.org. Trained as a video artist, his work has recently focussed on the internet and re-contextualizing found material. His work shows the changing vernacular of the contemporary computer user, and how global corporations (Google, Adobe, Apple) control this new visual grammar. Together with Robert Sakrowski he started http://net.artdatabase.org/about/ to document net art in its surrounding. http://constantdullaart.com/
Sandra Fauconnier Art Historian (MA, Ghent University, 1997) with a background in architecture. Was a media archivist at V2_ Institute for the Unstable Media (Rotterdam, NL) and worked for the mediatheque and collection of the Netherlands Media Art Institute (Amsterdam, NL). Currently, she is project lead for ARTtube, a website with videos about art and design, at Museum Boijmans Van Beuningen (Rotterdam, NL). http://www.linkedin.com/in/sandrafauconnier
Sabine Niederer Head of CREATE-IT, the applied research center of the School for Design and Communication at the Amsterdam University of Applied Sciences. She is also coordinator of the Digital Methods Initiative, the new media PhD program at the Department of Media Studies, University of Amsterdam. In her PhD project Sabine studies the technicity of online content, such as the non-human content agents that co-author online content (i.e. Twitter bots, Wikipedia bots), in an analysis of climate change skepticism on the Web. From 2004 until 2012, Sabine worked at the Institute of Network Cultures, with director Geert Lovink.
Robert Sakrowski Creator of net.artdatabase.org. Art historian and curator in the field of net-based art. He founded the netart-datenbank.org in 1999 and was also a founding member of the web.museum e.V. in the year 2005. Since 1999 he has been dealing with the problem of how to collect and present netart while preserving its specific context. Currently running the initiative Curating YouTube.
Kimberley Spreeuwenberg Production and Report. Recently obtained her MA in New Media at the University of Amsterdam with a thesis on open source critique (Androids promise of freedom, a renewal of open source critique). Also has a background in graphic design. www.kimmyspreeuw.nl
Ward ten Voorde Video & Post-production. Independent media production professional. Expert in audiovisual documentation of media art and installations. 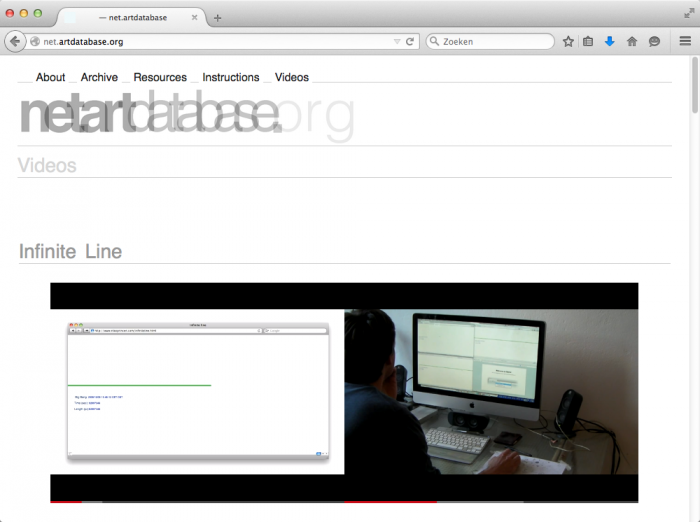