The internet is broken! What can we learn from the pioneers of media art to take back the internet? For this new edition of ReCoding we are inspired by Mouchette, one of the online persona’s created by Martine Neddam back in 1996, far before the establishment of social media.

The internet is broken! What can we learn from the pioneers of media art to take back the internet? For this new edition of ReCoding we are inspired by Mouchette, one of the online persona’s created by Martine Neddam back in 1996, far before the establishment of social media.

Net-art researcher Annet Dekker will lead the conversation and give us insights into context and ideologies of early net-artists. Then we’ll focus on Mouchette and Martine Neddam’s work to learn more about how storytelling, personas, and web functions are closely intertwined. The evening will close with a conversation with Yehwan Song who is commissioned by CCU to create a new piece inspired on Mouchette. We’ll talk with Yehwan about the ideologies and visions embedded in her work and get a first reaction on her plans to ReCode Mouchette.

Prior to the talks it is possible to sign up for dinner, drinks, and networking. We will be serving soup. Please note: when you buy a Dinner ticket and you are welcome at 18:15 instead of 20:00.

Background Since the internet has been colonized and is not the free space it once was, makers are often revisiting the 90s’ net aesthetics to be inspired. This is not only happening as a form of nostalgia: recent developments around the federated web or more simply hosting and building your own website (outside of the constraints of social media platform politics) can be seen as an activist act. By inviting Martine Neddam, CCU aims to get familiar with the fundamental principles of early net-art and aims to inspire the new generation of makers to use the same ideologies in the context of the contemporary web technologies and internet culture.

ReCoding ReCoding aims to inspire the new generation of makers with the work of the Dutch Pioneers of Media Art. In the previous edition we invited Joost Rekveld and Driessens & Verstappen to take part and had around 35 artists participate in the workshops. Maurico van der Maessen de Sombreff recoded Joost Rekveld and Carolien Teunisse recoded Driessens & Verstappen. This year, Yehwan Song is commisioned to create a new project inspired by the work of Martine Neddam.

Martine Neddam
Martine Neddam is an artist who uses language as raw material. Since she began as an artist her favorites subjects always were ‘speech acts’, modes of address, words in the public space. Since 1988 she exposed text objects (banners, plaques, shadows on the wall) in museums and galleries. She also realized many large scale public commissions in several european countries : Netherlands, France, Great Britain. Since 1996, she creates virtual characters who lead an autonomous artistic existence in which the real author remains invisible, among others Mouchette (1996) and David Still (2001) Madja Edelstein-Gomez (2019). In 2013 she created a participative software ‘MyDesktopLife’, supported by the ZKM | Center for Art and Media (Karlsruhe). Her work was exhibited in among others in La Biennale de Montréal (2011), Whitechapel Gallery (London, 2016) and the Stedelijk Museum (Amsterdam, 2018-2021).

Annet Dekker
Annet Dekker is a curator and researcher. Currently she is Assistant Professor Archival and Information Studies and Cultural Analysis at the University of Amsterdam and Visiting Professor and co-director of the Centre for the Study of the Networked Image at London South Bank University. She has published numerous essays and edited several volumes, among others, Documentation as Art (co-edited with Gabriella Giannachi, Routledge 2022) and Curating Digital Art. From Presenting and Collecting Digital Art to Networked Co-Curating (Valiz 2021).

Mouchette
Mouchette is the artist and the artwork all in one. Mythical avatar born in the earliest times of net.art,(1996) she is still alive and creating, more than 20 years later. Is Mouchette an immortal, an online digital creature of new type? Or simply the evidence that art on internet has the capacity to last beyond the obsolescence of technology? Her internet presence and influence are constantly growing.

Yehwan Song
Yehwan Song is a Korean-born artist, graphic designer, and web developer. She designs and develops experimental websites and interactive graphics driven by content structure instead of static templates and web design conventions. Through her projects, she tries to flip the general understanding of web design and subvert common user-experience behaviors which oversimplifies users’ behavior. She pursue diversity above consistency and efficiency. 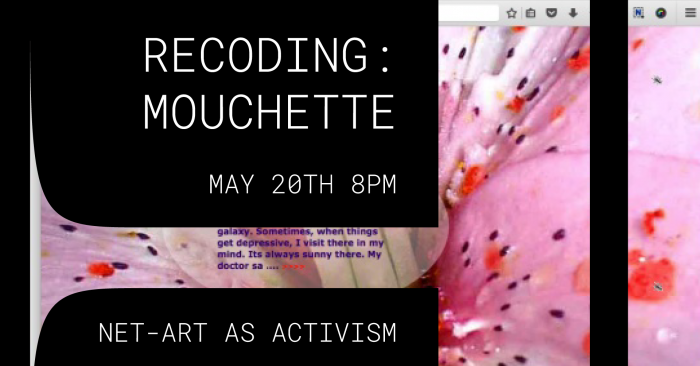