David Garcia, Annet Dekker, Ian Alan Paul: As If: The Media Artist as Trickster / How Much Of This Is Fiction

David Garcia and Annet Dekker – in collaboration with Ian Alan Paul – are the curators of the exhibition As If: The Media Artist as Trickster / How Much Of This Is Fiction (2017). What follows is the result of an e-mail interview with the three curators between 22-28 February, by Anne Celine Sikma and Iona Sharp Casas (Framer Framed, Amsterdam).

David Garcia and Annet Dekker – in collaboration with Ian Alan Paul – are the curators of the exhibition As If: The Media Artist as Trickster / How Much Of This Is Fiction (2017). What follows is the result of an e-mail interview with the three curators between 22-28 February, by Anne Celine Sikma and Iona Sharp Casas (Framer Framed, Amsterdam).

What do you want to convey with this exhibition?

Ian Alan Paul: This exhibition, which I should say was primarily conceived of by Annet and David, does a really wonderful job of drawing novel constellations between various artivist practices which are strikingly wide-reaching and diverse, and has already produced numerous valuable conversations concerning the potential roles that media art could continue to play in the present. For me, the exhibition most clearly speaks to a need to reconsider the mediated nature of politics in the contemporary moment, and to seriously consider what possibilities for intervention and political action remain in a time of sweepingly disorienting political change.

Annet Dekker: The exhibition started as a way to capture and explore the various methods and forms of tactical media in which forms of participation, dialogue and community engagement are emphasised to challenge power and gain control – while blurring the distinction between everyday life and art. Since tactical media contains a vast array of socially engaged practices that appear with increasing regularity in fields ranging from theatre to activism, and urban planning to visual art, we needed to focus on it more – especially given the time and space we had at our disposal. One of the main tactics that kept coming back was the notion and form of the ‘trickster’ (thanks to Nat Muller, who first recognised this connection).

Although the trickster has a long and varied history, we decided to focus on the trickster in tactical media, and in particular when it used the method of fiction. This provided a means to get insight into methods, contextualise the conditions of site, and broaden the range of what constitutes tactical media. Fiction as form, or method (as David mentioned it), became a perfect tool to uncover and explore how tactical media is still current today. In other words, if the world is a fiction, then we need to be[come] the authors of it.

David Garcia: I hope that the exhibition opens up a degree of scepticism around current narratives and many clichés that we are living in a post-truth/postFact world. I also hope that the cross generational nature of the exhibition will reveal certain historical continuities. The 1990s innovations of certain kinds of DIY media practices opened up the possibility of a new category that occupied a no man’s land between art media and politics that we called Tactical Media. I am keen that the value of this cultural positioning should be reclaimed and maintained.

Are there certain reactions you hope to trigger from the audience?

IAP: I think the exhibition operates on two levels. First, the fictions and imaginative propositions that are mobilized across the various projects can emerge as a form of potent critique, a technique of defamiliarizing and making-strange that allows us to reconsider the present and see it anew. Second, the speculative nature of the exhibition as a whole perhaps can allow us to keep something like the utopian alive as a political possibility, even if utopian politics get expressed as an “as if” rather than as a known destination.

AD: I hope people walk away with a new understanding of how the media works and how it doesn’t work, how one can turn the tools of marketing -and media more generally- back to its makers, media and politics. Or, how to use media to overtake media. Now of course recently we witnessed how these strategies have been re-appropriated, but despite that -or better, because of that- I believe it’s important to always stress the transformative affects media have, and the various ways it can be used to communicate and empower certain people while disempowering others. It’s important to understand how even culture is used to manipulate, and how to be able to regain control. Pockets of autonomous or collective action have been and still are integral to daily life, and I believe cultural production is always a necessary component of organising social action.

DG: Hope would be the main reaction I would like to see – hope that comes from seeing practitioners across the generations using media tools to re-fashion reality in unpredictable and defiant ways.

Many of the artworks presented in As If can be interpreted as being part of the legacy of Tactical Media. Tactical Media was a phenomenon coined in the mid-90s, which referred to several high-speed, mediatic DIY practices through which artists and activists created their own media pieces, instead of relying on the existing, permanent media channels.

Interestingly, there now seems to be a revival of the phenomenon. This revival can be seen in several of the art pieces of the exhibition, as well as in the vast amount of media material that surfaces constantly on the internet. One could also say, also, that Trump’s attempts at creating alternative narratives using the media (Twitter, press conferences, etc.) is also a – twisted – example of Tactical Media. Does this mean that the phenomenon of Tactical Media has now been adopted by the right-wing? If so, how do we fight this: with truth, or by creating more alternative fiction?

IAP: I’m not sure that the problem is with truth or fiction per say, or with the oft-repeated ‘alternative facts’ of the Trump administration, but rather with what I would call the historical conditions of truth and belief. Are publics critical? If so, how? If not, why not? What do we allow ourselves to believe and have faith in? What do we find unbelievable? What limits do we set around our imaginations, political and otherwise, and how do those limits both constrain and make possible particular ways of being in the world? These questions are much more interesting to me than whether there’s a lack (or excess) or truth or fiction, and this exhibition shows us how tactical media can perhaps suggest some answers for us.

AD: I agree with Ian, I’m not convinced about the binary opposition of good or false, truth or fiction, in the end any fact is always subjective – what is indeed more important is to understand the reason and the context of why things happen. Things (facts or fictions) don’t usually happen in isolation, they are embedded in networks. So, indeed what, who and why have/do these things become truth or alternative fiction? One needs to comprehend the tactics, and hence their consequences. To me the method of As If helps to find answers: by positing ‘as if’ something has already happened you can reverse or re-track what didn’t yet happen, and thus act upon it. One of the important elements of As If is also the use of fun and humour, spreading confusion, and in particular the mode of inversion, which by disrupting assumptions and acceptable behaviour triggers new modes of thinking and acting.

DG: Well Tactical Media has always had dark side. The US radio shock jocks (on which Trump was a regular guest), and of course the Jihadist (ISIS as most extreme), use media in ways that are horrific. So, we are not technological determinists. We have been aware for some time that Tactical Media per se are not intrinsically emancipatory. The info wars remain an arms race, and there is no doubt in my mind that the principal media sub-cultures now are an ecology linking message boards, far right blogs and the social media platforms into a powerful new force. And the new white supremacists are streets ahead of the left in occupying this territory. We need to move fast to challenge this dominance. But it won’t be easy because “spreadability” is the key to success in the social media world, and for reasons we are yet to understand “hate” is highly “spreadable”.

To end this interview, we are curious to know: do you have a favourite piece of the exhibition?

IAP: I find Morehshin Allahyari’s 3d-printed copies of artefacts that have been destroyed by ISIS to be incredibly compelling, poignant, insightful, and provocative. The politics of remembering could be another way for us to think about the “as if,” locating the possibility of the future in our relation with the past.

AD: This is perhaps the most difficult question! I think the works together and presented as part of, or within the space of, the Guantanamo Bay Museum of Art and History is what makes the exhibition work. Even though the individual works respond powerfully, albeit in their own specific way – as aesthetic practice or public engagement – to the current state of affairs, it’s under the umbrella of the GBMAH [Guantanamo Bay Museum of Art and History] that they obtain an additional layer of meaning. The urgency of action in whatever form, material or message, is emphasised. As such, I hope, the exhibition suggests a kind of modus operandi for how to navigate, or outsmart, the present political and social landscape, where signing online petitions, marching in rallies, and token gestures of ‘reaching out’ -however useful- may not be enough. These works suggest a need to move out from the shadows and take action by [un]masking reality and showing alternative strategies.

DG: Oh dear, that’s hard – many to choose from. I would opt for the Homeland is Not a Series by the Arabian Street Artists. For me this is classic tactical media work in which the weak use media tactics to turn the tables on the strong. By infiltrating a hit TV show with subversive graffiti, and then using publicity skills to create a media storm around the Home land series; this is an exemplary intervention. And the accompanying movie carries a kind of glitch aesthetic that expresses the way in which media interventions can momentarily rupture in our sense of everyday reality. This completes the passage. It shows how we need to work across media platforms and genres. It is media art as ideology critique, and popular culture, all at the same time.

The exhibition As If: The Media Artist as Trickster / How Much Of This Is Fiction focusing on politically inspired media art that uses deception in all its forms, is present in Framer Framed from 20 January until the 5 March 2017. Expanded iterations of the exhibition will be presented under the second different title – How Much Of This Is Fiction – in FACT (Foundation for Art and Creative Technology), Liverpool, (2 March – 31 May 2017); and HeK (House of Electronic Arts), Basel (21 March – 21 May 2017). 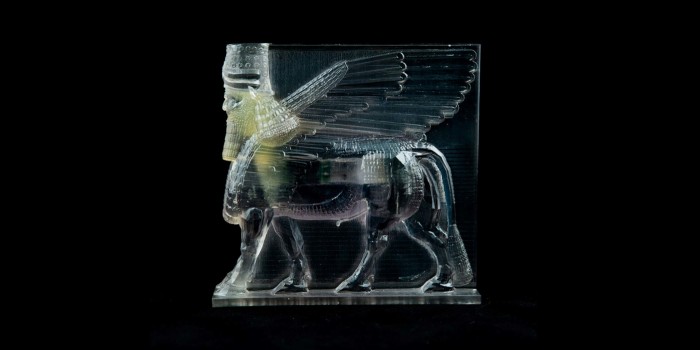