In collaboration with the Stedelijk Museum Amsterdam, STEIM, Muziekgebouw aan ’t IJ and EYE, Sonic Acts will host a series of masterclasses as part of this year’s festival – The Dark Universe.

The masterclasses provide a unique opportunity for artists, musicians and other creative professionals to work with five internationally renowned artists. In a concentrated and intimate setting, participants will gain insight into the artists’ concepts, work processes, and methods of composition, production and research through hands-on workshops, discussions, and seminars.

The masterclasses are aimed at professional artists, musicians, composers, film makers, academics and advanced students. Deadline for applications is 5 February. Please send a biography and a short motivation outlining why you would like to take part in a specific masterclass to: masterclass@sonicacts.com.
Attending multiple classes is possible. Late or incomplete applications will not be considered. You will be informed about the result of your application by 10 February. A detailed schedule as well as more information about the preparation for the masterclass will be sent to successful applicants with this notification.

There is a fee of € 35,00 to participate per masterclass. Catering will be provided. Masterclass participants will receive reduced admission for the festival (professional accreditation for € 65,00).

Tony Conrad (US) is an avant-garde video artist, experimental filmmaker, musician/composer, sound artist, teacher and writer. A pioneering force behind the evolution of minimalism, Conrad introduced the idea of Eternal Music, a droning, mesmerising performance idiom which employed long durations, amplification and precise pitch to explore new worlds of sound. Conrad’s masterclass will be an extended lecture performance about his work, artistic concepts and thoughts, touching on both his film work (The Flicker), and drone music.

Goodiepal (Gæoudjiparl) (FO/DK) is a controversial musician and composer of his own kind of radical computer music. He declared intellectual war against the stupidity in modern computer music and media art when he quit his job at the Royal Academy of Music in Aarhus. He performs and lectures about his work and ideas worldwide and travels on his special bicycle, which enables him to produce the electricity he requires. In this way he gets closer to mechanics and experiments with transhumanism. His recent book El Camino del Hardcore features his graphic notation work. His masterclass, aimed at DIY artists, composers and media artists will be an exchange of thoughts, in which also the work of the participants will be discussed.

CM von Hausswolff (SE) is a composer and a conceptual artist. Sound recording devices are his main instrument as a composer; as a conceptual artist he works with performance art, light- and sound installations and photography. Mike Harding (UK) is a curator, producer, lecturer and music publisher. He runs the Touch label together with Jon Wozencroft. In the masterclass led by CM von Hausswolff & Mike Harding, participants will work on their own version of freq_out.  For freq_out – a concept by CM von Hausswolff – twelve participants are allotted ranges of frequency within the audible sound spectrum. Participant number one will be allotted 0–25 Hz, number two 25–65 Hz, and so on. Over a period of four days, the task of the participant is to compose one sound work each. The work cannot contain any sounds beyond the allotted frequency range, but can be of any length and is played back as a loop. The final work consists of 12 smaller works joined together into a whole.

Trevor Paglen (US) is an artist and geographer. His work deliberately blurs lines between science, contemporary art, journalism and other disciplines to construct unfamiliar, yet meticulously researched ways to see and interpret the world. He is the author of five books, including Blank Spots on the Map: The Dark Geography of the Pentagon’s Secret World, and numerous articles on subjects such as experimental geography, state secrecy, military symbology, photography, and visuality. His most recent book, The Last Pictures, is a meditation on the intersections of deep-time, politics and art. His masterclass focuses on his methodologies and different ways of conducting research.

Steina and Woody Vasulka (IS/CZ/US) are major figures in video history – technical pioneers who have contributed enormously to the evolution of the medium and who continue to be major practitioners of video as art. The Vasulkas’ technological investigations into analogue and digital processes and their development of electronic imaging tools, which began in the early 1970s, place them among the primary architects of an expressive electronic vocabulary of image-making. Their masterclass will be a discussion of the development of their practice and working methodologies, and will reflect how the change of technologies and interfaces influences the presentation, documentation and archiving of their work.

The full programme of Sonic Acts – The Dark Universe (21-24 February 2013) is online.
All information on the website can be found online.

The Sonic Acts Masterclasses are made possible with the support of the Mondriaan Fund and from the European Commission.

This communication reflects the views only of the author, and the Commission cannot be held responsible for any use which may be made of the information contained therein. 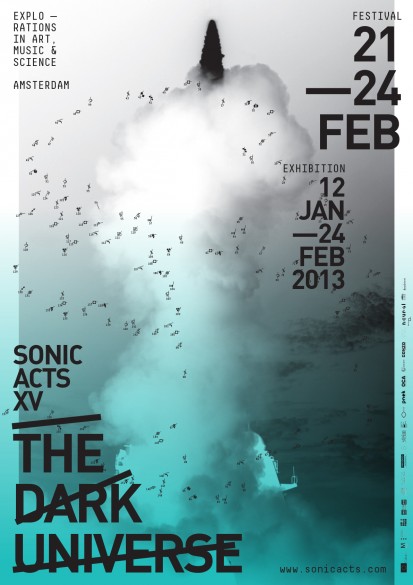