Art Platforms and Cultural Production on the Internet

Olga Goriunova is well known for her involvement and contribution to the shaping of the field of software art, as co-organizer of the software art festivals Read_me, the set-up of Runme.org, an online software art repository, as well as curator of Funware, an international travelling exhibition that deals with the appreciation of fun as an inventive force in software (art) development. In her new publication Art Platforms and Cultural Production on the Internet she turns her attention to the organizational aesthetics of processes that produce digital culture.

Review of Art Platforms and Cultural Production on the Internet
by Olga Goriunova (London: Routledge, 2011), published in OPEN, May 2012

Olga Goriunova is well known for her involvement and contribution to the shaping of the field of software art, as co-organizer of the software art festivals Read_me, the set-up of Runme.org, an online software art repository, as well as curator of Funware, an international travelling exhibition that deals with the appreciation of fun as an inventive force in software (art) development. In her new publication Art Platforms and Cultural Production on the Internet she turns her attention to the organizational aesthetics of processes that produce digital culture.

A platform is an organizational concept with a long history. In times of political and social unrest, revolutions and avant-gardes, people form groups that are organized around a number of guidelines or specific issues. In 2005 Tim O’Reilly and John Battelle coined the phrase ‘the web as platform’ as the core principle of Web 2.0, thereby giving the notion of a platform renewed, albeit as Goriunova attests a flattened, meaning. Whereas the web as platform is foremost described as a conglomerate of technical development, Goriunova stresses the importance of art platforms as experiments in the aesthetics of organization. Rather than a set of objects, these experiments show a specific kind of cultural practice that is open-ended and emerges from grass-roots processes.

Groiunova clearly makes a difference between art platforms and earlier attempts to define online practices as networked. Although the art platform is a genre of networked organization in which it provides a ‘conceptual device that allows for a differentiation and problematization of networks’, by following the theoretical discourse around network theory, moving from Bruno Latour’s sociologist Actor-Network Theory back to the concept of network theory. In the last decade, network theory was popularized by the publication Linked (2003) by physicist Albert-László Barabási, but Goriunova makes clear that that the coming together of the social sciences with the exact sciences was foremost based on a misunderstanding that can still be traced today. This, as Goriunova shows, doesn’t mean that thinking about networks has stopped, several approaches can be named that have tried to imagine networks in heterogeneous and nonlinear ways, including ‘bifurcation (Progogine and Deleuze/Guattari), networks as assemblages (Manuel DeLanda) and ecologies and media ecologies (Guattari, Bateson and Fuller)’. (p. 5) So what does the notion of art platforms add to this plethora?

An art platform would ideally be a concept that reflects upon its own media ecology. Whereas media ecology is a way of looking, seeing, doing and making, Goriunova describes an art platform as an entity, an activity and a process of development. ‘Art platforms engage with living practices in their blurred and ‘dirty’ forms between a more broadly defined swathe of culture and art’, they are to be found in the ‘grey’ zones of cultural production. Furthermore, she argues, art platforms make you think about the organizational forms of culture, thus an organizational aesthetics. Such an approach ‘sheds light on the ways in which digital culture and aesthetics are constituted and advanced’. (p. 13) Goriunova defines organizational aesthetics as ‘a process of emergence and a mode of enquiry that gives us a way to understand a digital object, process or body. It is not only a way of looking, but also a dynamic assembling and coming up with such a body.’ (p. 17) Organizational aesthetics is grounded in the digital native and, while structuring and organizing creativity that traverses art platforms, it highlights the development of new forces to overcome repetition and strive for vitality. Moreover, it pays attention to the interplays of power and the kinds of structures and conduct these imply.

Goriunova makes these forces explicit in meticulous descriptions of several of these art practices. Perhaps not surprisingly, these examples move beyond the obvious Internet art practices that have gained recognition over the years. By affirming that the brilliant can be found in the grey and banal corners of the Internet, thereby moving away from the economically and socially deterministic post-Marxist critique of subordination as well as the liberal thinking on creative industries, Goriunova points to the first example, which few readers would consider art: Udaff.com. At first sight Udaff resembles a porn site and swearing pool inhabited by white male adults, on closer inspection it turns out to be especially interesting because of the writing of kreativs. As Goriunova explains, Udaff is a popular Russian language platform that hosts a variety of literary practices, of which the kreativs are the most vital. By analysing its structure, being innately digital and thus following digital structures of organization and aesthetic, its writing, ‘diy vocabulary; virtuoso and abundant swearing; and elegantly, purposefully wrong orthography’ (p. 54) and its usage of commenting as well as the power of social figures that are being extended and transformed through the networks of production, Goriunova makes a strong argument that talks across social histories, networks, concepts and actors.

In a similar vein, Goriunova analyses the software art repository Runme.org, which she co- founded and was part of during its time of existence (2001 – present); although the site still functions, its prime importance lasted for five years. Runme.org was created as ‘a format that would be something between an out-of-scale festival, a distributed salon, infinite exhibition, and open collection, sets of samizdat books, and sets of relationships – all in all, an art platform in the making’. (p. 71) Again, it is by closely tracing and analysing the structure and making various relations that the brilliance of the art platform happens and starts to shine. The quotes and snippets of conversations, of which the more interesting ones can also be found in the footnotes, exemplify the formation and functioning of the art platform. At times hilarious, funny and anecdotal it is always through thorough analysis that Goriunova makes her argument. Goriunova also tackles recent developments and practices on Second Life and phenomena like surf clubs and digital folklore. The breadth and reach of her observations, understanding and ability to decipher these practices is remarkable and not found in current writings about digital practices.

Goriunova is not someone to take her own writing, and analysis for that matter, for granted. This shows itself in the detailed explanations and elaborations of her reasoning by making connections to current and past (theoretical) debates. Nor is she afraid to tackle thorny issues, as for example the issue of the usefulness of open and free software, pointing her finger to the sore spots that are often neglected or (deliberately) ignored. For example she argues that a break ‘from the fetishism of proprietary software may lead to the commodification of social processes that are layered into software production and operation’. (p. 23) The only drawback of the book is that it is too short, making it at times too dense. It would be great to elaborate on specifics to accommodate the reader who is not necessarily familiar with the various strands of thought that permeate the book. Nevertheless, this book is extremely important. From a theoretical point of view it shows how can we discuss and analyse new digital phenomenon from a material and aesthetical point of view. From a practical point of view, Goriunova provides us with a wonderful and thick description of the current usage of the web. Although she is leaving it open to where these new tendencies may lead, she provides users, audiences and theoreticians with workable tools and methods with which to analyse current movements. Or, as Goriunova has taught us, it is ‘creating a means to speak about what is grey and banal on the Internet [that] allows for a recognition of the brilliant; and such a means of cautious differentiation may likely turn out to develop a sensibility for a set of interesting tendencies rather than dispensing with the developments in new media reign of banality at large’. (p. 45)

Annet Dekker is an independent researcher, curator and writer. She is interested in the influence of technology, science and popular culture on art and vice versa. Currently she is core tutor at Piet Zwart Institute, Rotterdam. In 2009 she initiated aaaan.net with Annette Wolfsberger; they coordinate artists-in-residences and set up strategic and sustainable collaborations with (inter)national arts organisations. Previously she worked as web curator for SKOR (2010–2012), was programme manager at Virtueel Platform (2008–2010), head of exhibitions, education and artists-in-residence at the Netherlands Media Art Institute (1999–2008), and editor of several publications on digital art and issues of preservation. In 2008 she began a Ph.D. research at the Centre for Cultural Studies, Goldsmiths University in London, titled Enabling the Future, or How to Survive FOREVER. A study of networks, processes and ambiguity in net art and the need for an expanded practice of conservation. 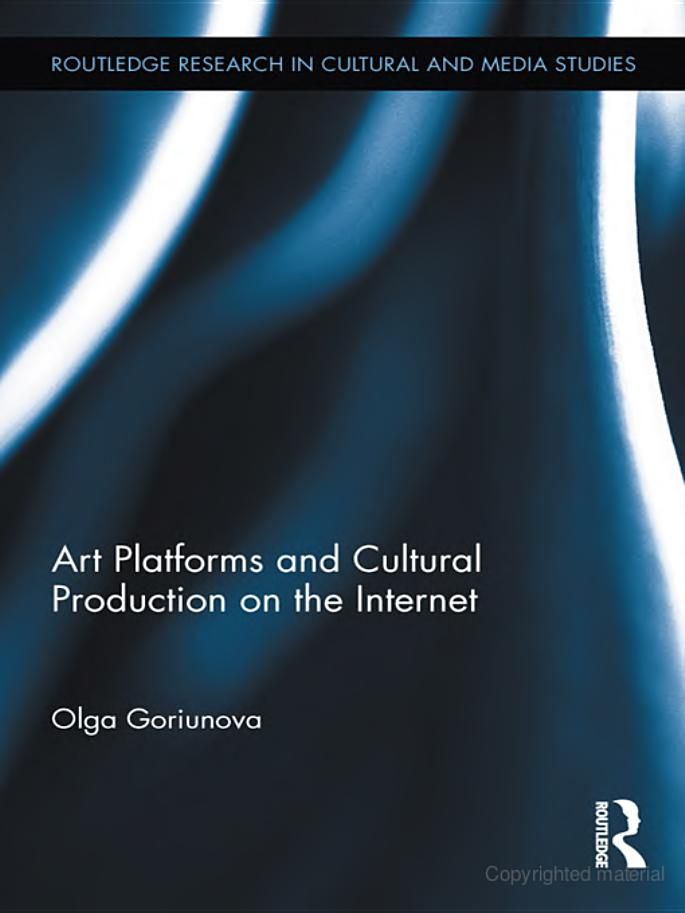