The exhibition Are You Experienced shows work by artists in which elements from the club world are found or used. The merging of images, profusion and density of images, confrontational light effects, increasing speed, complex applications of or, on the other hand, the absence of sound, and the influence of smell and theated and aroused. The confrontational and surprising manner in which the different artists try to take onlookers along with them into their world leaves the viewer disoriented. 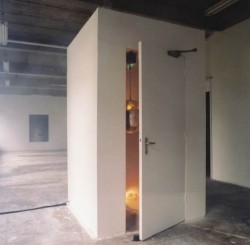 The work Disco for n/one by Mark Bain (NL/USA) can be seen as a spatial compression, taking elements from a night club (lighting, smoke and sound) and cramming them into a small space. This activated room of desires can’t be entered: it is an intensified experience that cannot be felt. With a door that only opens part way, one can peek in to get a glimpse of what happens inside. The exhibition is intended as a place where various senses are stimulated.

A dying fall of sound, transformed by the internal circuitry of camera flash systems into a flash of light, freezes any passing shadow onto a sensitized screen, where the image itself slowly fades until obliterated by the succeeding flash. The installation The Origin of Painting by DISINFORMATION (UK) allows visitors to inscribe a huge painting with images created by their own shadows. 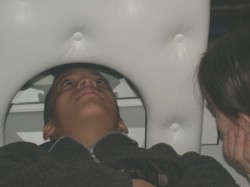 ‘No other drugs required. All senses operative.’

In the space of Gerald Van Der Kaap (NL) the famous White Chill Terminal is shown. Designed by Peter Giele it was first shown at Artlab, Tokyo in 1992. The Chill Terminals have traveled around the world and have been shown in both art and club environments. In Are you Experienced the original tapes Brain 4.2 and Brain 5.1, can be seen. The monitors on the wall show I Want A Permanent Wave that consists of images and sounds that Van Der Kaap has used during his live performances. 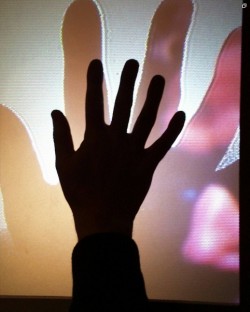 Looking Glass by Caroline Rye (UK) is a video mirror which allows viewers to create living images of themselves via the medium of touch. The installation confounds our conventional expectations of mirrors, art galleries and video by refusing the visualization of an image/identity without a concomitant touch. By emphasizing touch and vision as contingent this exhibit harks back to an earlier, pre-photographic, order of image making, thereby provoking questions about the different qualities of identification promoted by the different senses.

Clara Ursitti (UK) is literally led by her nose, as her work is predominantly scent based. In the daily assault of visual images, scents linger in people’s memories. Scent has the power of being very intimate and sensuous without being graphic. Of all the senses it is the only one that has direct links to the brain, and indeed to the oldest part where the emotional centers are thought to be located. For her piece Sub Club she extracted the smell and temperature of a dance club. The aromas used provoke a direct response in the viewer. 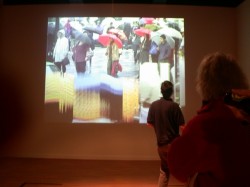 As participants move closer to the projection on the installation screen they push deeper into time – but only in the area of the screen directly in front of them. As they move away the fragmented image heals in their wake – like a pond returning to stillness. In the installation Liquid Time by Camille Utterback (USA), the interface of one’s body, which can only exist in one place, at one tim , is the means to create a space in which multiple times and perspectives coexist. The resulting imagery can be described as video cubism.

With special thanks to : The British Councel