Archival Absurdities, or a walk in the park

New essay in: Rehearsing Hospitality, edited by Yvonne Billimore and Jussi Koitela, Helsinki: FRAME Reflections on Anne Geene's No. 235 / Encyclopaedia of an Allotment, the imaginary project 'Allotment Archives', the art of noticing by Anne Tsing and slow science by Isabelle Stengers.

Reflections on Anne Geene’s No. 235 / Encyclopaedia of an Allotment, the imaginary project ‘Allotment Archives’, the art of noticing by Anna Tsing and slow science by Isabelle Stengers.

Allotments are busy places teeming with living creatures trying to do the thing they are best at: growing and multiplying. The battle of the fittest is often disturbed by human interference, bushes are trimmed, hedges tamed, weeds eradicated, and flowers picked before their seeds or roots can disperse to conquer new soil. Pesticides minimise the damage caused by unwanted bugs, and after fruits and vegetables are harvested and eaten, their precious seeds and pips are carelessly tossed into the garbage. From a human perspective maintaining a garden is about creating a thriving ecology. Brightly coloured marigold flowers add zest to green salads, but when planted in a vegetable garden also ensure that ants, whiteflies and other vermin avoid young vegetable sprouts. If marigold plants sense the presence of microscopic worms known as nematodes, they release a toxin into the soil and any of the devouring-root-worms that are too close perish. The dynamics of gardening is a good example of how gardeners, artists and archivists could start to think together. For a gardener, the challenge is paying attention to sudden changes: an unexpected turn in the weather may ruin crops. For an archivist, the challenge is noticing that there are always other factors, including human and non-human, which—sometimes at unanticipated moments—may influence the record keeping process. The call for generalisations can hinder an archivist’s attention for the particularities of change and process or their ability to hear other voices. For an artist, the challenge is observing the minute details and finding a way to translate them such that they appeal to the imagination. What the three share is a first step towards the “arts of noticing”, which as explained by anthropologist Anna Tsing, means that rather than merely looking and seeing, sniffing and smelling, touching and feeling, or listening and hearing, implies a subtle shift: to notice is also to realise there is a change, that the past is different from the present.[i] Similar to Geene, Tsing uses a metaphor to describe society at large—for Geene it is the microcosm of her allotment, and for Tsing it is the significance of the matsutake, an expensive mushroom and Japanese delicacy, which due to its root system and symbiotic relationship with certain types of pine trees cannot be cultivated. By tracing the various sources of the matsutake Tsing reveals the human, fungal and arboreal relationships, and how they are entangled with global social and economic processes. So, what happens when using the concept of noticing as a model of creating and fostering ecologies in which humans and non-human alike may thrive? 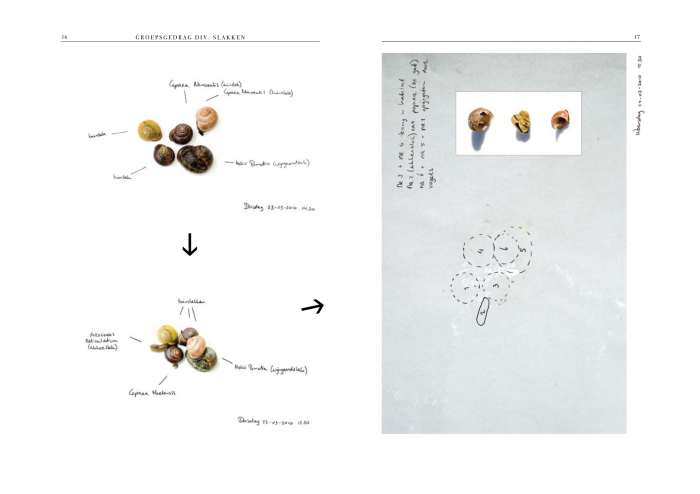