ALGORITHMIC RUBBISH: DARING TO DEFY MISFORTUNE
ANNET DEKKER
The combined advent of “mechanical turks” and paywalls, along with the various media reports about obscure data transactions, algorithms that connect people and businesses at or against their wishes, and the monitoring strategies which are invisible to many, has already created a myriad of new products and systems that monitor and influence our lives. This fact is a direct challenge to the idea that everyone can use Internet and digital media safely and equally. In an age in which computer technology has already shown its darker side, when optimisation is lord and master but quantity rules supreme to the detriment of diversity and quality, artists such as Constant Dullaart, Femke Herregraven, Erica Scourti and Matthew Plummer-Fernandez are embracing the new status quo. Their reaction to the often invisible but far-reaching changes is positive and opportunistic: they are taking matters into their own hands. This presentation “Algorithmic Rubbish: Daring to Defy Misfortune” – an automatically generated title – demonstrates how artists use and abuse, with great precision and humour, the mechanisms and strategies that large companies and governments secretly apply. Reminiscent of the conceptual art practice of, for example Hans Haacke and Marinus Boezem, the artworks presented offer a way out and expose something that tends to be invisible or secret for most people.

APE MATTERS
FLORIAN GÖTTKE
Starting from his work Anthroprosaic from 2007, Florian Göttke will talk about understanding the relationship between human and animal through the lens of critical and cultural posthumanism. Anthroprosaic is a series of twelve small bronze sculptures presented in and around the model of a high-rise building. The work shows a band of ape-like beings in an abandoned human environment, where they interact with the remnants of our human society. The twelve scenes point to categories like language, violence, tool-use, or self-awareness, with which Western thought tried to define the human by constructing the separation towards its closest relatives, the apes.

THIS UNWIELDY OBJECT RESEARCH DRAMA, 2014
ANNA ZETT
The animated dinosaurs of Hollywood cinema meet the petrified ghosts of colonial science. A protagonist encounters mountains and paleontologists on both sides of the American Frontier. The story ends in the middle.

Annet Dekker is a curator and researcher. Currently she is researcher Digital Preservation at TATE, London, Visiting Lecturer and Research Fellow at London South Bank University & The Photographers’ Gallery, London, tutor at Piet Zwart Institute, Rotterdam, and fellow at Het Nieuwe Instituut. She publishes widely on issues of digital art and preservation in international peer reviewed journals, books and magazines, and edited several publications. Previously she worked as Web curator for SKOR, was programme manager at Virtueel Platform, and head of exhibitions, education and artists-in-residence at the Netherlands Media Art Institute. In 2014 she completed her PhD on conserving net art at Goldsmiths University of London. http://aaaan.net (http://aaaan.net/)

Florian Göttke is a visual artist and researcher based in Amsterdam since 1993, when he entered the Gerrit Rietveld Academie to study Fine Art. Göttke investigates the functioning of public images and their relationship to social memory and politics. His lecture and book Toppled about the fallen statues of Saddam Hussein, is a critical study of image practices of appropriation and manipulation in our contemporary media society. Toppled was nominated for the Dutch Doc Award for documentary photography in 2011. Currently Göttke is working on his PhD in Artistic Research entitled “Burning Images – performing effigies as political protest” at the University of Amsterdam and the Dutch Art Institute/MfA ArtEZ.

Anna Zett makes videos, writes texts and performs experiments that deal with the tragicomedy of science and technology. With a background in philosophy and academic research she is now working across the disciplines of cinema, radio, drama and dance. Playfully engaged with the afterworlds and underworlds of modernity, her artistic practice tries to rely on voluntary vulnerability as much as it relies on historical inquiry and an experimental setup. She was born in Leipzig in 1983, lives in Berlin and shows her work mostly elsewhere. 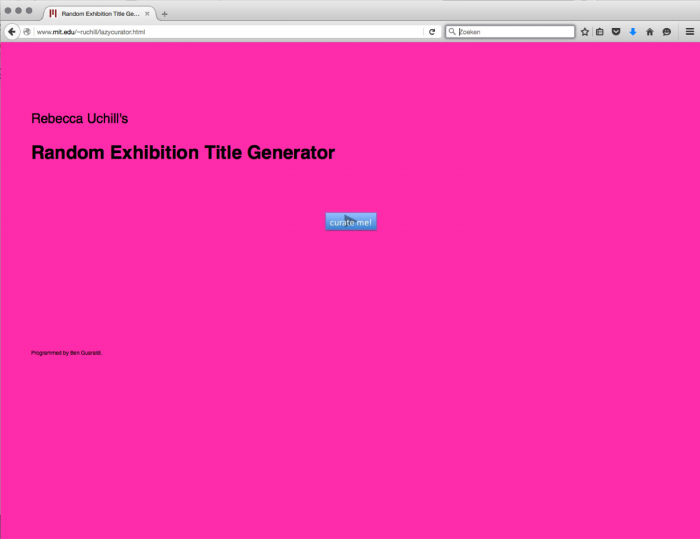