Yolande Harris: A Journey Through Sound

An interview with Yolande Harris 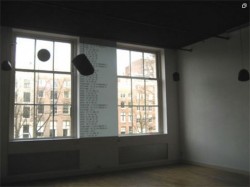 Yolande Harris (UK 1975) is a composer and media-artist working with sound, image and space in a technologically extended environment. Her work Sun Run Sun is part of the Eco-Visualization exhibition at <>TAG Den Haag and the Territorial Phantom exhibition at the Netherlands Media Art Institute. Together with Annet Dekker Carmen Hutting spoke to her at the Netherlands Media Art Institute where she’s currently working on her Artist–in-Residence project, Sun Run Sun.

Carmen Hutting [CH]: You studied composing, how did you get involved with digital media?

Yolande Harris [YH]: When I studied musical composition and performance I was interested in sound as a material and different forms of musical notation. I was also working with ideas of communication through scores and the nature of an absent public in walking and sailing performances. I looked for broader ideas and techniques for composition and began to explore electronics and digital media for manipulating sound and image.

I was experimenting with ways to incorporate electronic and recorded sound and video into a composition so I could perform it in a live setting. This led me to electronic instrument design; learning how to control and design for those elements of sound -live- in a meaningful way.

Another part of my background is in architecture and video. In my postgraduate research I looked at relations between architecture, moving image and sound; the nature of movement in space, to describe a space through sound, video and movement, and how to use these as architectural or performance materials. Once these ‘immaterial’ elements become the main material, other physical descriptions of space tend to fall away leaving only the experience of a space.

Looking back it’s interesting for me to see that my early sailing and walking projects for absent publics, particularly the Sargasso Sail across the Bermuda Triangle in 1997, introduced me to practical technologies of navigation and communication at sea. I can trace the ideas of sonic navigations in Sun Run Sun back to these explorations where technologies have a day-to-day practical consequence. This is how I see digital media in my work, as an integral part of the nature of the work.

CH: What in your opinion is the difference between sound and imagery? Is sound is a better vehicle for communication?

YH: As I mentioned I’ve always been working with the two, even from my first experiments in graphic scores, notation systems and video, which were about interpretation of sound through images and back again.

For this project, I’ve been using video and image but much more sparsely than before because I noticed that it invades ones experience very quickly, much more quickly than sound. If you have the two together, image takes over your attention immediately, whereas sound acts on a different temporal level. That imbalance was irritating me and made me look at different ways of treating image in audiovisual work.

One of the most prominent things that emerged from my research was the navigation idea; one way of relating to an environment is through navigation. The act of moving through the world includes observation, calculation and technological engagement. Of course, I was looking at maps, charts and notations of sound and landscapes. But visualising the satellite data in an image doesn’t have the effect that I’m trying to reach. It puts you into a viewing mode that sucks you into a space other than the one you’re in. The whole point for me is to experience a space that you’re submerged in. Using image translates navigation to a flat surface, whereas using sound immerses you in the space; a space that’s continuously developing.

I’ve been thinking for a long time about sound as something more comparable to liquid. Sound waves can move through solids and through walls, they moves through water and under water. Sound carries through liquid and solid as it does through air.

CH: Would you say it’s a more physical interpretation of information?

That’s why in this project I’m concentrating on the individual; your body becomes a focal point, which you can’t escape from.

In music for example we always had the musician to watch, somebody who was making the sound. This provided a focal point, somewhere outside of yourself. But the experience of music is very much an internal thing.

I think that navigation technologies are provoking a very superficial understanding of environment and movement through space, and in doing so we’re losing something specific in our physical and emotional relation to these environments. So I try to push this project in the direction of something more intuitive and directly experienced.

YH: There has to be subconscious interpretation because the sounds don’t convey specific meanings.

Listening is a good way to hear changes in patterns over time. When I sonify something, I have to choose what sounds I’m going to use and how to interpret the data. It always involves manipulating the sound in order to hear the data, and it can be interpreted in many ways. These gaps and possibilities for misunderstandings or imagination might not be useful to science. But these choices are part of the decisions one makes as an artist.

CH: So how do you use the data and what do you add as an artist?

YH: I’m not trying to make something practically useful, like enabling you to find your way through Amsterdam with sound.

The data I’m using comes from the GPS navigation satellites. I’m using two types of data, one is the satellite data, and the other is positional data.

Each satellite has its own identification number and comes with three parameters; elevation, azimuth and signal strength or signal-to-noise ratio. You might receive this data from up to 12 satellites at once on a GPS receiver. But in normal navigation one only knows the calculated longitude and latitude, which is derived from these moving satellites. So I was really interested what it would sound like to hear the satellites overhead moving, coming in and out of focus.

I’m concentrating on the fact that these two notions, the locations and movements of the satellites and those of the person on the ground, have different data and meaning and therefore a different quality, which can be layered in sound.

YH: The sound you choose to sonify the movement could be interpreted as the subjective part, or manipulation to put it bluntly. Do you play with that?

I think I do play with that, but not in terms of manipulation. It’s possible to think of the sonification as the real thing, as having an authority of reality, but actually it’s an interpretation that provokes multiple other interpretations. In this way I consciously engage in the ability of music to reach another subjective space. That’s what I’m looking for.

I’m trying to present a phenomenon that one would not normally be aware of in a neutral way, leaving the interpretations to be made by the audience. I am not explicitly trying to manipulate a specific emotional or political response but open up awareness to one’s surroundings. I’ve found that opening ones ears also opens ones eyes.

Annet Dekker [AD]: What is your interest in satellites?

YH: It’s an existing space, literally a space. The satellites wrap the world in a technological infrastructure. To me it’s essential that the sound comes from the satellites, to hear an external space that encloses us within it. That’s why I want to make it sound as clearly as possible.

I’m trying to keep the sounds extremely simple. The idea is to use very basic and typical variations of electronic sounds to produce distinctive sound layers. They’re like fundamental little sonic units, acted on by the data.
The satellites connect to the GPS receiver every second. So there is a predominant rhythm, or various rhythms, that give the sound a certain quality. These rhythms are part of the data. They’re not qualities that I imposed on them, not my musical choice, but part of the material.

AD: Do you consider the political meaning, a connotation of war and aggression, and the connotation of communication that linger around satellites as part of the experience?

YH: I agree, these connotations are an important part of reassessing our relationship to the consumer technologies of GPS navigation devices.

Looking into historical navigation, there are two very clear periods that parallel the development of the satellite infrastructure for navigation. One was to find a reliable method of determining longitude at sea, the other was the construction of lighthouses.

The quest to find longitude was an international collaboration and competition lasting for nearly a hundred years, as was lighthouse construction. It’s similar with the GPS system. It’s political and military, far out of scale with anything we happen to have in our car, or understanding of what GPS in our telephones do. It’s a different scale all together.

The very process of navigating used to be done by observation of the environment. These observations have been made redundant now we have a device that tells us where we are. Many people actually transport themselves from A to B with no idea what or where they’re driving through. And when the device breaks down -which it sometimes does- they’re lost. So that detachment from place, which is provoked by the technology, is very fascinating. I don’t think it has actually happened before.

You have your location so simply. It strikes me that you could ignore those other elements in an extreme feeling of false security, because you “know” where you are, even far out at sea. So if the GPS looses contact or it breaks down, you could be more lost than ever before. There are different ways of knowing, and knowledge of environment through navigation were tightly tied together. But consumer GPS technology seems to have split the navigation from the environment. It’s a complete lostness, a different lostness.

AD: The beaching of large numbers of whales has been directly related to the extreme ocean noise pollution by military testing. Would the same happen to humans in the future because we’re relying too much on technology?

YH: What would be the human parallel of the traumatic image of beached whales? It’s very easy just to rely on what is given and we’re so incredibly adaptable to absorbing new technologies. I’m sure that GPS in this navigational age has pushed us forward and has enormous potential. But I think at the same time we risk losing a lot of what we already know comprising a fundamental engagement to our environment. In Sun Run Sun I’m working towards a hybrid between these two ways of knowing, between navigation through technology and intuitive embodied navigation – a techno-intuition. 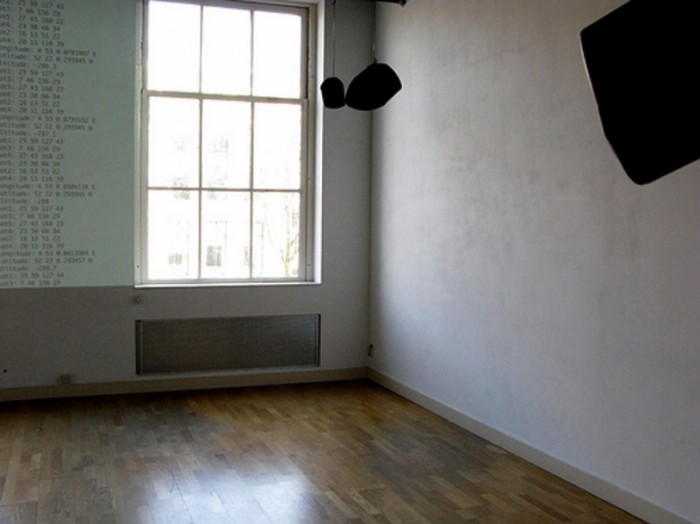